The apartment complex in Genting Highlands is often claimed to be one of Malaysia’s most haunted buildings. 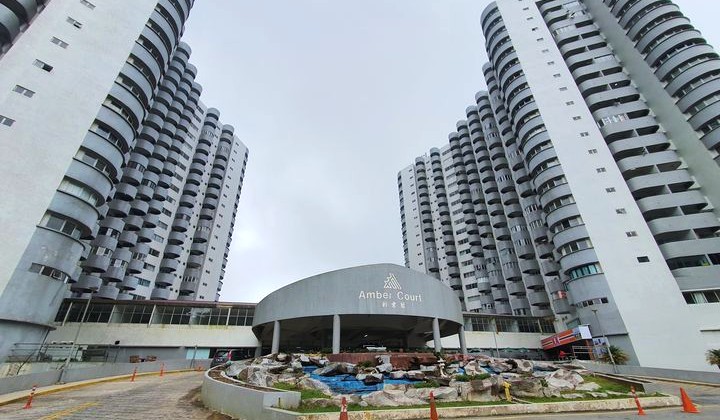 Public interest in Amber Court Villa D’Genting Resort has been recently reignited when residents protested the unending rumours of the apartment complex being haunted last week as reported by The Star.

More than 100 residents and Amber Court Management Corporation chairman Datuk Sri Dr KK Chai blasted content creators and ‘YouTubers’ who consistently play up the building as one of the most haunted places in Malaysia.

As a result, Amber Court suffers a poor reputation even until today.

A trip up the mountain

Naturally, when people deny such things, it garners even more curiosity. TRP ascended the mountain to investigate Amber Court for ourselves.

The road there is long and winding, almost a 10-minute drive past Genting Highlands resort. Amber Court apartments is quite hidden, at the literal end of the road, but it offers a frankly excellent mountain view.

As the apartment complex comes into view, the building honestly seems rather boring, painted a light gray that has little of the dark grimy discolouration so commonly found in online videos.

What is truly surprising, in fact, is that the moment you head in the main lobby, you are greeted by the bright glowing neon sign of a KK Mart.

Uniformed security guards greeted us at the door. There were also a good handful of people milling around in the lobby area, seemingly residents and a couple of visitors.

There was even a reception for a homestay business, which actually looked very warm and inviting.

So is it scary?

Look, any building that has a 24-hour convinience store in the lobby is far from haunted. In fact, this supposedly “most haunted building in Malaysia” is frankly less scary than your old high school at night.

Surprisingly, there were also more than a few longtime residents living in the apartment complex. A longtime resident we spoke to who has lived there for 5 years said that he had never experienced anything spooky at all while living there.

In fact, the lack of spooky encounters tend to be something of a disappointment, as people interested in the paranormal often try to stay the night at the apartments.

Ghost hunters and paranormal thrill seekers looking for ghosts are very disappointed when they stay here. A lot of those ‘scary’ videos online are engineered in some way or faked with filters and stuff.

READ MORE: Klang Valley’s Most Notorious Dark Tourism Sites, And The Stories Behind Them

The apartment complex is simply old with a rather dated design, considering that it was built more than two decades ago in 1996, then faced some years of abandonment due to the Asian financial crisis in 1997.

Right now, the empty lobby lends to its mildly eerie vibes, but the remaining shopkeepers noted that the place used to have more businesses on site. However, many closed down during the pandemic when tourism came to a standstill.

Still, businesses are slowly recovering. We even noted some construction happening in the outer balcony area, which probably means that good news as tourism restarts.

The main reason for its ill-repute and scary appearance is likely the moss that flourishes in the cold and damp air up the mountains. The red-coloured algae and mold that thrives in the foggy weather can be found not just on Amber Court, but even other buildings like Genting Highland’s own RSC staff hostel buildings.

The only thing vaguely haunted about this apartment complex is the 2017 horror film Haunted Hotel. Amber Court was used as a shooting location in some parts of the film, but that’s simply part of movie magic.

(And as someone who actually watched the film, it’s really not that scary either.)

Amber Court is perfectly fine if you’re on a budget trip to Genting Highlands, or if you want a reprieve from our usual hot weather, or if you are super into fantastic mountain views. But if you’re looking for the paranormal, you’d have better luck elsewhere.