The place is even older than the temples of Borobudur in Indonesia and Angkor Wat in Cambodia. 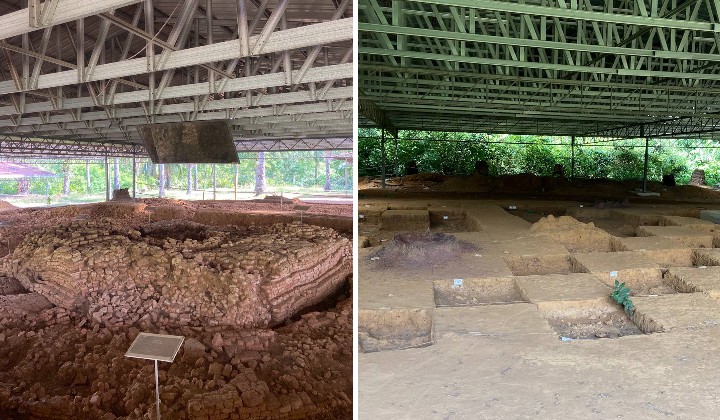 Hey, if you still remember our history lessons in high school, you’ll remember how Malacca (15th century CE/AD) was once a very well-known port, right? If you know your history, you’ll know that there are many other important kingdoms and ports in Malaysia way before Malacca, right?

Where Is This Place?

One of the important discoveries from Kedah Tua lies in the Bujang Valley, near Merbok. Now Bujang Valley is a wide place (224 square kilometres) filled with historical discoveries covering between Gunung Jerai in the north and Muda River in the south. But the most well-known site there is called the Bujang Valley Archaeological Museum (this is where the ancient temples are reconstructed and displayed).

Specifically, Sungai Batu is one of the places that’s in the big Bujang Valley. It’s a 4 km2 wide archaeological site nestled in the quiet palm oil plantation, founded by USM researchers and led by Prof. Dato’ Dr. Mokhtar Saidin back in 2007. The excavation works began around 2009 and stopped around 2021 for a few apparent reasons (funding, hello?). There are around 54 sites successfully excavated by archaeologists around 2021 and actually many more treasures hidden underground.

What’s So Special About Sungai Batu?

If you love archaeology and love to find out about random historical facts, you’ll love this place.

Once upon a time, along the rivers of Sungai Muda, Sungai Batu was actually near a very big bay where ships carrying traders would port and do trade there. Now if you can see the place, the ‘bay’ is just a mere pond or swamp as the sea level has receded over the centuries. Researchers believe that inside the pond (what used to be a very big river), there are evidences of ancient ships ‘resting’ there.

But why were ships stopping by there? That’s because Sungai Batu was a very famous trading port back then, well-known all around the world for having one of the best quality iron. Even in Sanskrit, Kedah was known as ‘Kataha’ by traders which means The Bowl Of Iron. The irons produced here (sourced from Mount Jerai) were even exported throughout the ancient world to make weapons and chariots.

Hence, there are countless findings here that prove our own ancient civilization’s technological and economical achievements. Some of them are wharves or docks, iron smelting sites, administrative buildings and also one religious monument. We all know Buddhism and Hinduism came to the peninsular before Islam, right? But the religious monument found in Sungai Batu proves that before any religion came here, the locals adopted animism.

Basically, you can see all the 2,800-year-old discoveries with your own eyes here in Sungai Batu. You can see the flat brick plains all around the sites, where they used to be loading docks (necessary for commodity transports) and administrative buildings (necessary for trade regulation).

There are also sites for iron smelting, where our ancient ancestors used to melt the iron rocks (hematite and magnetite) from Mount Jerai and process them into iron ingots to be exported. You can see how our locals used to smelt irons with furnaces, tuyeres (a tube to control the air pressure inside and furnace) and other tools. The iron smelting technology then used to be one of the best in the world, FYI.

However, because these archaeological artefacts or buildings are so old, unfortunately, they are also so fragile. As in, you’ll only see ruins here. Not the actual man-made awesome buildings you’ll see in adventure movies. Hey, those things in movies or tourist sites are mostly reconstructed, ours is still in the works.

What Can You Do There?

Apart from the grand tour around the 4 km2 archaeological site, you can also do several fun activities here. All these activities including the tour will last around half a day.

They have ‘hands-on’ excavation, brick-making and also iron smelting demonstrations. Here are some of the pictures for you to see.

Experience how the strong bricks made for the buildings you see at the sites are made. They’ll give you all the materials and will show you the demo. After that, you can get all handsy and make your own brick. They also have an extra packet of the instant clay if you wanna try and do it at home.

This is the most fun part. You’ll feel straight out of an Indiana Jones movie.

For this activity, they’ll teach you how archaeologists actually dig up artefacts buried underground. You’ll see the boxes they’ve labelled and the tools they’ll use for the excavation.

But of course, the actual digging on one actual box will take up to 4 days or even a week to finish (depends also on the objective of the dig and the depth estimated). Here, they’ve made the process easier for visitors to dig up and find the treasure within 30 minutes (they actually had to bury the artefacts in a new area specifically for visitors).

For the rate of these activities, you can see the infographic below, in the blue boxes. Basically, a full tour of the place with these three activities can cost about RM100 per head. But if you only want the guided tour, it’s actually just RM20 per head.

Students can get half-priced discounts. So students, whip out your student IDs!

How To Get There?

All in all, you can go by yourself but you have to hire a tour guide, in my opinion. This is not really a tourist-friendly place, as there’s little signage to guide you where to go or to explain what you’re actually seeing. Coming as a zero-knowledged lone ranger is not really ideal unless you hire a tour guide, then he’ll explain everything in detail and even show you some 2D animations about the place.

To make your visit worth the money, bring along some friends and come in a group. Then all the activities will be more fun and enjoyable!

You can visit Sungai Batu in three ways:

Bear in mind that this place is inside an oil palm plantation. So, it’s an outdoor area, with no air conditioning! No caves, no pyramids, no jungle. Just sites with roofs, that’s all.

If you wanna head on over here (and feel like Indiana Jones), it’s probably best to prepare yourselves with these:

Come, learn and witness the our origin’s own establishement, their knowledge and technology back in the days that put them on the map of the world once upon a time.

By knowing our past, only then we can appreciate our own heritage and advance oursleves and our nation.

So, fellow explorers, have fun there!