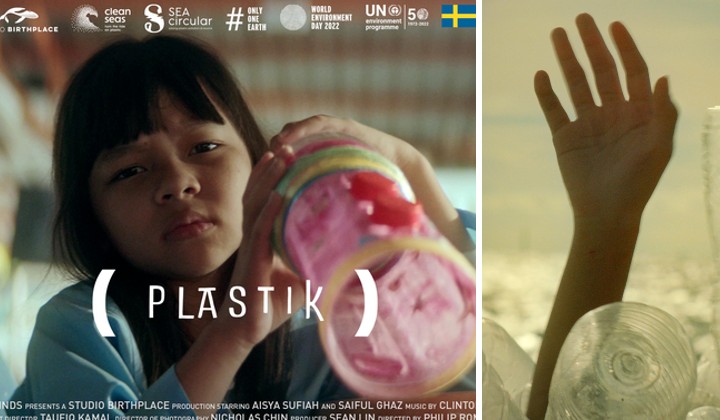 Filmed in Sepang, an international short film titled ‘PLASTIK’ produced by Sean Lin of Studio Birthplace and directed by Philip Rom has caught the attention of the public to end the use of single plastics.

Premiered globally in conjunction with World Environment Day, this 2 and half minute film featured a young Malaysian girl seeing the world through a plastic bottle, letting her imagination run wild, witnessing the horrendous scenes of what would happen if the world keeps on using single-use plastics.

This film is endorsed by the United Nations Environment Programme (UNEP), as the message behind this film supports the UNEA 5.2 resolution, which is a legally binding agreement from 175 member states to end plastic pollution by the end of 2024.

Besides the cast and production team being Malaysians, the soundtrack of the film, ‘Just A Dream’ was also composed (MKNK) and performed (JSN) by Malaysian artists too. The key message behind having local talents and settings in this film is to connect with the public in our region and make us realize the catastrophe that’s coming to us if we ignore efforts of sustainability.

The set of this film depicts the relatable reality of our environment now with plastic bottles on beaches and plastic bags on the side roads. Who hasn’t seen that here, huh?

A short film to tackle a long issue

South-East Asia has become a major hotspot for plastic pollution, and a way to tackle this is to educate the public about plastic pollution. It could start with a simple video highlighting the haunting effects of single-use plastics.

It seems like nothing much but it makes you think twice before buying products with single-use plastics. And with that, comes the job of advocating your family members and your friends to think twice too.

This can create a ripple effect on the public where sooner or later, everyone will be aware and hopefully avoid the use of plastics. Small steps make big strides, as they say.

Films have the power to effect social change through impactful and compelling storytelling.

We hope that in producing a short film with a fully South-East Asian cast and crew we can deepen engagement and catalyze long-lasting behaviour change amongst the region’s youth audience to take individual and collective action to end plastic pollution,”

Kay Vasey, Founder of MeshMinds and Executive Producer of (PLASTIK)

You can check the full short film here. Disclaimer: It’s like a straight punch to the heart and makes you think twice before buying anything with plastics.