What’s thought to be a single species in Linnaean taxonomy, two species of fruit trees were confirmed as distinct taxa by molecular studies. 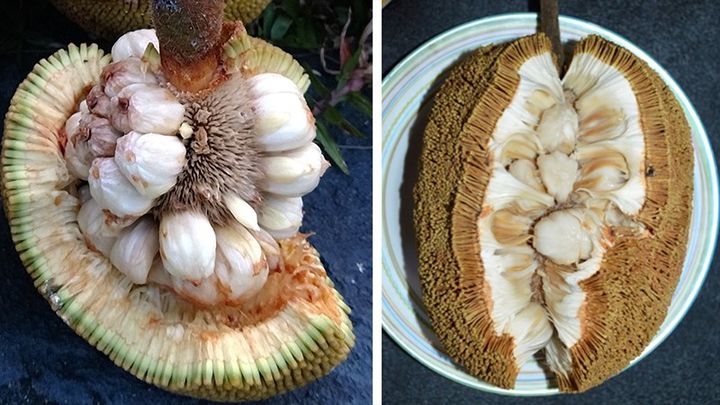 Two species of fruit trees found in East Malaysia were long recognized as distinct by the local Iban and Dusun communities. However, botanists categorized them both as the same species in current Linnaean taxonomy, until molecular research proved our native communities right.

For almost two centuries, Western science had considered Artocarpus odoratissimus (A. odoratissimus) to be a single species despite the locals calling the different trees by different names.

Thanks to the locals, now the tree has been given a new and almost different species name. The fruits that we’re talking about are the generic Terap fruits.

READ MORE: The ‘Fruit Basket’ Of Sarawak Has Weird Fruit You Can’t Get Elsewhere

These fruits are commonly best known as Terap fruit or Artocarpus odoratissimus which is found in vast quantitiues in the Bornean Island (especially Sabah and Sarawak). However, there are actually key differences in Terap fruits.

The fruit with the thicker pulp is called lumok by the Ibans in Sarawak and timadang by the Dusuns in Sabah. The trees are cultivated ones, the fruits are sweeter and the leaves are bigger.

Meanwhile, the fruit with the thinner pulp is called pingan by the Ibans and tonggom-tonggom by the Dusuns. The trees are wild ones, the fruits are less sweeter and the leaves are smaller.

To the rest of the world (and even West Malaysians!) they are just called Terap fruits, and can be eaten raw, cooked with soup or veggies or even mixed with flour to make kuih.

For us, these fruits look similar to a jackfruit (nangka), cempedak, or breadfruit (sukun) but have smaller and rounder shapes compared to them. They have white flesh instead of yellow and are said to taste soft, sweet and juicy like a mango, annona or longan. Besides having a strong smell, both of the fruits have seeds that can be cooked and eaten too.

Reserchers thought it was just the same species

According to a news report published on Nature, the A. odoratissimus was first scientifcally named in 1837 by Manuel Blanco, a Spanish friar living in the Philippines.

But in 2016, while conducting their field work in Sarawak, Elliot Gardner, a researcher from the International Center for Tropical Botany in Miami, Florida, along with his Malaysian colleagues found out that the Iban field botanists were using two names to refer to the tree they’re studying on. With more probing and a big help from the locals, they later realised that there’s two differents types of fruits, similar but not quite the same.

To test the theory, they did a genetic study and later on published the paper on 6 June 2022 in Current Biology. The new genetic study proves that the trees were indeed of different species.

Officially now, the scientific name for Artocarpus odoratissimus is only valid for lumok while pingan has a newer fancy name called Artocarpus mutabilis.

What does this discovery signify?

This A. odoratissimus and A. mutabilis reclassification exemplifies how Indigenous knowledge can change and strengthen our understanding of biodiversity.

Elliot Gardner, co-author of the new genetic study and botanist at the International Center for Tropical Botany in Miami, Florida

This means that Indegenious or local knowledge also plays a pivotal role in understanding the bigger picture of a study. There are information that researchers can’t even access without the local’s insight. With their help, studies on botany or any other field for that matter can be understood better, in depth and with a new point of view.

So, next time you’re conducting a detailed study, be sure to ask the locals first, they might know a lot more than you do.

READ MORE: Think You Know Malaysian Fruits? Try These 15 Local Fruits That You Might Not Even Heard Of

Did You Know Each Malaysian State Has Its Own Special Traditional Baju Designs?