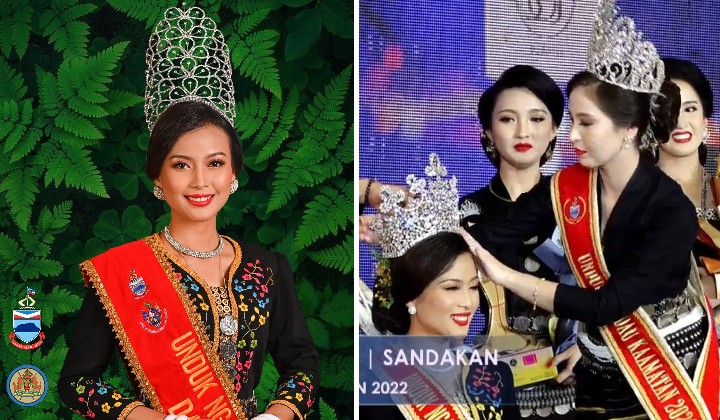 For Kaamatan the real celebration starts on the 30th of May until the 31 May. This is when the most awaited cultural event of the Kaamatan month is held, which is the Unduk Ngadau.

This year, around 44 contestants from 44 districts joined the pageant and the winner was named last night.

Frenerietta Sobitun, a 25-year-old primary school teacher has been crowned this year’s Unduk Ngadau. Representing Sandakan, the winner is fluent in Bahasa Malaysia, English and Kadazan Dusun and wore the Baju Labuk while being crowned last night.

Additionally, one of the famous winners of Unduk Ngadau is Daphne Iking, a Sabahan TV personality / Emcee / Celebrity that won the title of Unduk Ngadau champion in 2003.

Unduk Ngadau is a beauty pageant held annually and is unique to the state only. Sabahans can start to do their district-level selection as early as the 1 May and the peak state-level competition on the 30 and 31 May at the Kadazandusun Cultural Association Sabah (KDCA) building or Hongkod Koisaan in Panampang, Sabah.

It used to be a Sabahan-districts only competition but around 1995, Sabahans residing or working in Peninsular Malaysia can also join the competition and represent their current states/districts. For example, this year’s competition has contestants from Putrajaya, Johor, Melaka, and also Klang Valley. They’ve also had contestants from Pulau Pinang and Labuan before as well.

What is unique about this pageant is, the sole purpose is to commemorate the spirit of Huminodun, a beautiful princess who sacrificed herself to end the suffering of the people that faced the great famine.

My body will give rise to all sorts of edible plants to feed the people. My flesh will give rise to rice, my head—the coconut, my bones—tapioca, my toes—ginger, my teeth—maize and my knees—yams. Our people will never go hungry again.

Some of the Rules of the Pageant

To enter the pageant from the district level, contestants must be between the ages of 18-25 at that time.

As each district has different traditional costumes, delicacies, and cultures, the contestant needs to have a good knowledge of the traditions within their own districts and bring them to the stage.

There are a lot of titles to be won in this competition, the 1st place being the most aimed. But other than the 7 finalist places, there are also subsidiary titles such as Miss Natural Beauty (Tati Topiodo), Miss Friendly (Tati Tosuau), Best Dress (Bassan Tinandai Togingo) and their newly introduced title, Miss Culture, Agrotourism and Nature.

All these subsidiary titles will usually be announced during their pre-Unduk Ngadau event or the Charity Dinner called Sodop Unduk Ngadau. The prizes for these titles will get around RM500 to RM2500 cash prizes along with trophies and sashes.

For this year, the top 7 finalists that contended on the last night of Kaamatan (31 May), all walked away with cash and in-kind prizes. The winner got a prize worth RM120k with the 1st runner up getting RM75k and the second runner up getting RM62k worth of prizes respectively.

Our mother earth is gravely ill. This Kaamatan urges us to give back what we took from her. We must appreciate the legacy that God gave to our ancestors up to this day. By God’s grace, may the legacy continues to many more generations.

Persatuan Unduk Ngadau Sabah (PUNS) is an association of Unduk Ngadau’s alumni and also KDMR women (the local Sabahans). Some of their aims are to empower the KDMR women to uphold the traditional culture and core values of their society as well as to prioritize the rights and welfare of all Unduk Ngadau and KDMR women.

Sandakan To Get City Status This Year, Says Bung Mokhtar