Oriental magpie-robins in Malaysia are smuggled to Indonesia and other countries either for money, hobby or just fun (competitions). 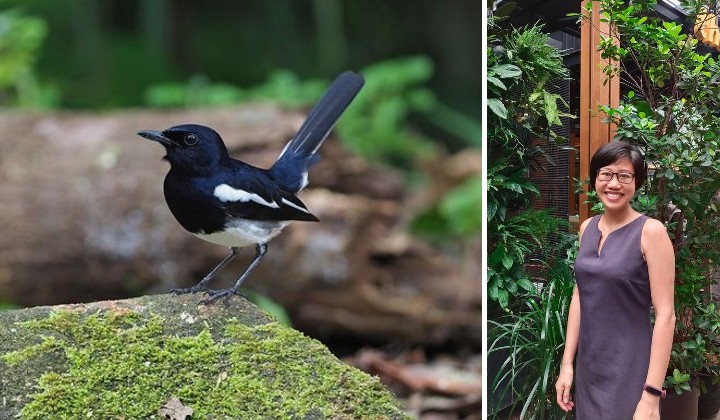 The Oriental magpie-robin is a type of songbird with black and white feathers which are prized for their melodious songs. It is commonly found in parts of Southeast Asia (in the wilds of Malaysia and other regions) and the Indian subcontinent. We may find them ubiquitous once here in Malaysia but who knows, because of a staggering amount of illegal trade, we won’t see them in our gardens or forests anymore.

A recent exclusive talk with our very own National Geographic Explorer Serene Chng told us the reality of what’s happening in Malaysia in regards to bird smuggling.

Serene Chng has had years of experience as a program officer in TRAFFIC, a global NGO that focuses on the wildlife trade. This experience earned her a grant from National Geographic to fund her research on “Investigating the bird trade on the Malaysia-Thailand border”.

Born in Singapore but spending 9 years in Malaysia till now, Serene has dedicated her life to conserving the wildlife, especially birds, which has lead to the formation of the International Union for Conservation of Nature Species Survival Commission Asian Songbird Specialist Trade Group (ASTSG) of which she is one of the coordinators.

With that grant and also her years of research on the wildlife bird trade, she and her team found out that the trend of seizures for Malaysia’s Oriental magpie-robin (burung murai kampung/cacing) has increased between 2015 and 2020 with around 26,950 of these birds confiscated in 44 incidents involving Malaysia.

This means that even though seizures have increased, the sheer number of illegal tradings has also increased.

In addition to that, around 64% of the seized birds were being trafficked from Malaysia to Indonesia. Before this, Indonesia also had a healthy population of these oriental magpie-robins in their country as well. However, this strong demand from Indonesia shows that the number of wild birds is depleting.

What Happens To Trafficked Birds?

If the birds reach the end consumer safely (not saying this is an okay thing to do) then at least they’re alive and safe. However, Serene and her team got the numbers from other researchers and found out there’s a possibility that approximately 30-90% of the birds in transport will not make it out alive.

This can be due to their conditions while being in transport. Some of them can be put into plastic tubes (to avoid the birds from struggling so much), cardbox boxes/ crates or even cages with tons of different species lumped together in one (zoonotic diseases, hello!).

Compare a healthy happy bird in the wild and a really sad bird dying in a cage. It’s sad, really.

These birds would get open wounds, their feathers ripped out, and injuries from sticking out their heads in the cages desperately trying to get out. Some of these birds will not survive the transport and these deaths would only be a waste.

The wildlife trade is damaging the populations of animals. There’s no doubt about that. In order to do something about this, we need to study the supply chain of this event and understand what keeps the demand going.

The trappers trap these birds, the middlemen are all about the money and the buyers drive the demand going. Usually, the trappers are locals who don’t really get much out of it. They just have access to the birds and some of the jobs have lucrative deals, which made them do it.

The middlemen handle the business and illegal poachings like giving directions, handling the transportation, finding smugglers and more. The buyers drive the demand either because of their hobby or because they just wanna be close to nature while in the city.

The authorities help by updating the laws and enforcing them (see how many seizures we get? Way to go!). Whereas we regular citizens can do a lot just by being aware.

What Can We Do About It

Awareness among the public plays a pivotal role in advocating for the silenced. By knowing about this issue, you can spread the awareness to others and maybe report to the authorities if you come across an exotic bird that’s not supposed to be there. Influencers or celebrities can play a big role too in spreading awareness. Even you yourself can share info and stories about the trade issue on your social media. This is the time to use your social media platforms responsibly!

Learning about the issue can have a bigger impact than you think.

Did you know that there’s a competition for singing birds out there? What about the fact that you can buy these exotic birds online? Guys! Don’t do that! Whatever you guys do, for passion or hobby, make sure that you get your birds legally and sustainably (there are also legal trades and sustainable trades you know). Illegal trade, of course, violates the law while unsustainable trade in a species can cause declining in population, fast.

All The Info And Stories In The Form Of A Podcast

In conjunction with World Environment Day on 5 June, National Geographic is doing a free 12-episode podcast series sharing stories about protecting the wonders of the world. National Geographic Explorers from all around the world have come together to create the said podcast named Expedition: Earth, including our very own Serene Chng in her episode called Expedition: Caged.

Other episodes bring you on an adventure to the depths of the Mekong river, the darkest caves in SEA, the most endangered forest of the Philippines, the death customs of Indonesians and many more thrilling stories about our Asian nature and environment. All of the 12 30-minutes episodes are available on Spotify, YouTube, as well as Apple Podcasts and you can have a listen to them for free here.

READ MORE: Uncaged: Malaysian Bird Keeper Tells Us Why He Lets His Birds Fly Away