From cartoons to true crime dramas, there’s a bit of something for everyone over the holidays. 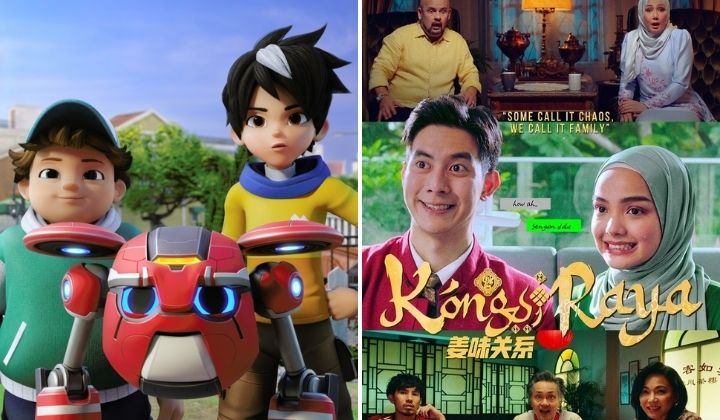 The Raya holidays are the perfect time to reunite and spend time with the family. Gather your family and have a good laugh or cry together by watching some of these new shows at home or at the cinemas. Who knows, it just might be another memorable Raya day to look back and cherish next time.

In this comedic film, a Chinese chef is in love with a Malay television producer but their relationship faced strong objections from both of their fathers who are feuding chefs. Things get out of hand when the fathers decide to go against each other in a live TV cooking competition. Directed by Teddy Chin, the film stars Chew Kin Wah, Erra Fazria, Harith Iskander and Qasrina Karim.

Directed by Muzzamer Rahman, the drama tells the story of an illegal e-hailing driver Aman (Amerul Affendi) and his experiences of driving passengers around the city late at night. The film also shows his friendship with his customer, Bella, a mysterious escort. The film is shot in black and white because the character Aman is colour blind, which adds some noir vibes to the film.

Where to watch: Disney+ Hotstar

King Lee Tae (Lee Joon) is making good strides to deflect the machinations of Vice Minister Park Gyewon and the Korean nobility from suppressing the house of Joseon for generations. However, the sudden arrival of a woman who captured King Lee Tae’s heart years before threatens to derail everything he has worked for. The Korean drama tells a tale of impossible choices, betrayal and deception.

Set in Kota Hilir (inspired by Bandar Hilir, Melaka), Mechamoto tells the story of Amato and his mechanical friend Mechabot, a robot with the ability to mechanize everyday objects into high-tech devices. It’s up to Amato and Mechabot to keep everyone safe from bad robots. The show also features Malaysia’s unique culture and traditions.

The Mechamoto Week Marathon starts from Monday to Sunday (2-8 May) from 11am to 1pm. New episodes of Mechamoto premiere every weekend at 3pm.

For a little fun activity for the kids, tune into a video tutorial at Cartoon Network social media pages @cartoonnetworkasia on Monday, 2 May, to learn how to make Mechamoto ketupat casing, Raya packet, and Raya greeting cards.

If you’re not sure what to watch during your Raya holidays, revisit your childhood by tuning into Redraw Your Summer. The segment features a host of shows such as new episodes of Teen Titans Go!, Mechamoto, Tweety Bird’s 80th Anniversary on Looney Tunes, Krypto The Superdog, We Bare Bears, and The Tom and Jerry Show.

Showtime 1958 will resonate with those who are intrigued by the old film industry. The film features the stories that unfold during a crucial time for the Malay film industry. It’s a true story behind the iconic Selamat Hari Raya song written in 1958 by P. Ramlee and Jamil Sulong during a variety show they organised to collect funds for fellow performers and friends who had lost their jobs at the studio.

7. Doctor Strange In The Multiverse of Madness

Where to watch: Cinemas

The highly anticipated Doctor Strange sequel unlocks the Multiverse and the madness within the MCU. With the help of old and new allies, Doctor Strange ventures into the unknown and traverses the mind-bending alternate realities to confront a mysterious adversary. The film will see the return of fan favourites and new characters such as Scarlet Witch, Wong and America Chavez.

Based on a true story, the eight-episode series explores the life of Michael Peterson, his sprawling North Carolina family, and the suspicious death of his wife, Kathleen Peterson. Kathleen died after falling down the staircase in their home but the circumstances of her death raised disturbing questions. It didn’t take long for suspicions to grow into accusations. The series features a star-studded ensemble cast with names such as Colin Firth, Sophie Turner, Toni Collette and Patrick Schwarzenegger.

9. The Sound of Magic

Based on the popular webtoon Annarasumanara by Ha Il-kwon, The Sound of Magic delves into the question of what it means to dream and become a good gorwn-up. Yoon Ah-yi (Choi Sung-Eun) is a girl who’s split between her childhood dreams and the grim reality while Na Il-deung (Hwang In-youp) faces pressure to realise his destiny. Both felt stuck in their lives until they come across a mystical magician Ri-eul (Ji Chang-wook) who introduces the joy of magic into their lives.

Where to watch: Disney+ Hotstar

Set in New York City, Sneakerella is a modern reimagining of the classic tale of Cinderella. El is an aspiring sneaker designer who also works as a stock boy in his late mother’s shoe shop. By chance, he bumps into Kira King, the daughter of sneaker tycoon Darius King. It doesn’t take long for his selfish stepbrothers to ruin his plans of ever making a name for himself. True to a Disney tale, the film features fresh rap beats and new songs for families to enjoy.

You might have seen the 2009 film starring Rachel McAdams and Eric Bana. This time, the popular story has been remade into an original HBO series. It tells the story of Clare and Henry (played by Rose Leslie and Theo James respectively) whose beautiful relationship is plagued by time travel. The six-episode series directed by Emmy Award winner David Nutter is sure to be another tear-jerking session.

Where to watch: Cinemas

In this comedic film, three widows – Midah, Rohayu and Ani – are die-hard fans of Aiman Zalini. When the singer’s last concert is announced, the three women try to raise funds to get concert tickets. The ladies failed to make any money at first but were inspired by a local loafer who became an overnight success by selling vape juice. Soon, the trio’s additive-free, all-natural and tobacco-free vape juice fly out of shelves and threaten the revenues of the drug cartel bosses.