People nowadays just wear it whatever style they want, they could be married by the day and virgins by the night if it were back in the days. 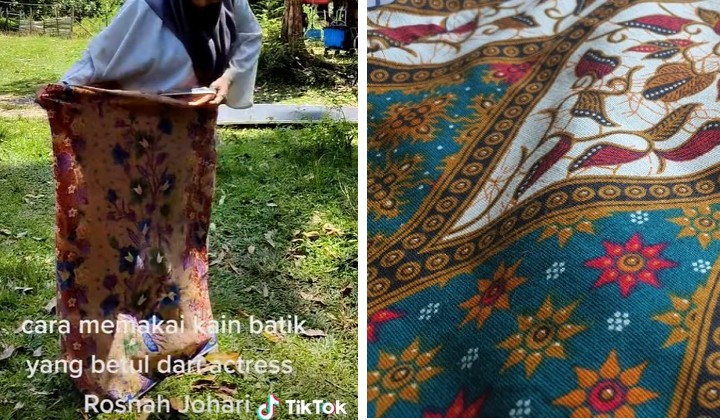 You know like in America they have the stop light party where the colour of your attire or beer cup signifies your relationship status?

Here in Malaysia, we have that too. But with Kain Batik instead of our attire or beer cups.

But our way is the legendary “Orang Tua-Tua Kata” (as the elders say) kinda way. Maybe it used to be a big deal back in the days but nowadays, it’s not compulsory to wear it as they say.

But it is interesting to know that we used to have a way of wearing specific styles to signify specific relationship status.

But before going into the details, we need to know the ‘anatomy’ of a Kain Batik just to get a grip of what is where.

The structure of a kain batik sarung consists of the head (kepala kain), the body (badan kain), the edges (gigi kain) and the upper and lower side patterns (gunung kain).

Usually, the pattern for the upper and lower sides are the same as the pattern enclosing the head of the batik which are the papan or left and right apit.

The only important part we need to know is the head which usually (not all) has the Pucuk Rebung motif, distinct from the rest of the pattern on the body of the batik.

Signals To Your Relationship Status

According to the Universiti Kebangsaan Malaysia Bangi (UKM) senior research fellow from the Institute of the Malay World and Civilization (ATMA), Professor Madya Datuk Paduka Dr Mohd Rosli Saludin, there are proper manners and ways to wear the Kain Batik and most men and women these days are oblivious to it.

Taking an example from a TikTok video of a Malaysian veteran actress, Rosnah Johari, she taught her crew how to wear the batik properly in a short casual demo in February this year.

The Head At The Front

If you’re placing the head at the front of your waist, this signifies someone being a virgin (anak dara). Now the way to show the head varies as some say to hide it and some also just say put it in the front to show you’re available.

From the video, Rosnah Johari suggested to head should be in the front, but to tie it on your waist, the motif should be hidden. Sort of like ‘you’re shy but also, yknow, available’.

The Head At The Back

If the head is at the back, this shows that that woman is married. When other men see this, they are expected to stay away or maintain a good level of boundary unless they wanna be chased down with a machete from the loving husband.

The Head At The Sides

If it’s at the sides, it shows that she is either a widow or a divorcee. If it’s on the right side, she’s a widow that lost her husband (it’s sad, so maybe approach with caution?). It could also mean she’s one of the female leader (ibu soko) or her husband is a leader in Adat Pepatih.

If it’s on the left side, she’s a divorcee and by wearing it this way, eligible men can approach her but with good manners and politeness to maintain her dignity.

Based on the TikTok video, nothing says you’re available more than a vibrant kain batik head showing on the sides or front huh?

Unorthodox Tips To Properly Wear It

Of course, a normal way to tie the batik for women is elegant and all.

But, wearing a Kain Batik also has its struggles. You don’t wanna don the sarung and suddenly have it slip down in the middle of an open house or just your family.

Here are some tips from our brothers and sisters to securely wear your batik.

Tie It Tighter By Slipping It Behind

One way to wear it tightly is to slide the first fold of the batik on your waist to the back (instead of the side) and the second fold on your front, then securely ‘lock’ it or hook it in.

Tie It The Men Style

While women simply wear the kain batik by just folding it and hooking it in the front, men have a different way of wearing their Kain Pelikat which is also folding it and rolling down the bottom part a bit just around the waist.

If it all fails, then wear a belt. Hey people back in the days have metal belts to secure the batik or sampin okay. It’s a fashion, really. You can wear it with whatever belt you have but of course, hide it under your shirt or blouse.

Alternatively, you could also wear the contemporary instant batik where they’ve sewn rubber bands around the waist for easy wearing.

At the end of the day, you do you! Wear the batik however you wanna wear that’s comfortable to you.

No worries, no fashion police are going to halt you in the middle of the day when you’re cooking or chilling in your house. Unless your mother-in-law or grandma-in-law is one… Well, good luck with that.

READ MORE: Did You Know Each Malaysian State Has Its Own Special Traditional Baju Designs?