Animated films and shows aren’t only for children, unlike what was said in Hollywood. 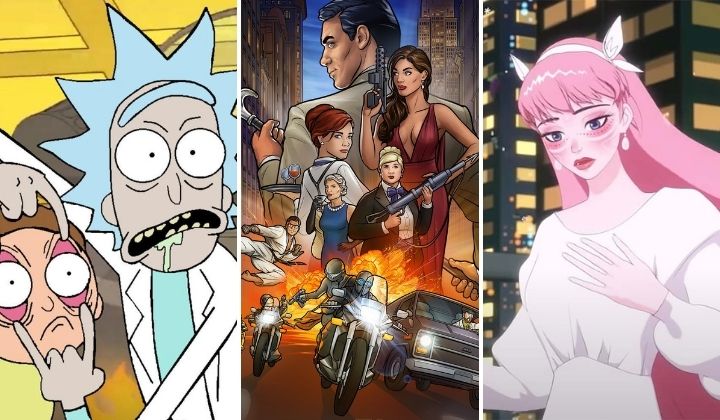 Have you been told that cartoons or animated shows are ‘just for kids’ the moment you’re not considered a child anymore?

Sadly, it’s an ‘adult’ sentiment shared across the world. Just recently, at the 49th Academy Awards, comedian Amy Schumer joked that animation was something adults endure while their children watch it.

Other award presenters mentioned that animated shows had been some of our most formative movie experiences as children.

Regardless of the constant snub in Hollywood, plenty of animated shows prove that the medium can touch adult subjects and still be entertaining for adults.

Here are some animated shows, in no particular order, that are popular for their entertaining story and style and remain a favourite for many viewers worldwide.

Rick and Morty burst into the scene in 2013 and the adult animated science fiction sitcom has left viewers wanting more. It’s bizarre that a story about a cynical and eccentric mad scientist Rick Sanchez dragging his grandson Morty Smith into crazy, space adventures could make a cultural impact, but it did. The show managed to bring back McDonald’s limited-edition Szechuan dipping sauce for a day when it was mentioned in the show.

Archer follows the exploits of a dysfunctional intelligence agency, with Sterling Archer taking the limelight. His seven colleagues orbit around him while he causes mayhems during missions. The language and jokes can be crude at times, but the show manages to balance the art of offending without going too far.

DuckTales (2017) may be geared toward children but this reboot’s impressive story arc is a must-watch. Yes, the 2017 DuckTales is better than the original show. The story starts with Donald Duck and his three nephews – Huey, Dewey and Louie – moving in with Uncle Scrooge. Little did they know, the family’s passion for adventures will unearth long-held secrets that might even alter family relationships.

Inside Job is everything a conspiracy theorist believes in, and the show happily mocks our reality. The animated sci-fi comedy follows Reagan Ridley and her colleagues. They work for a shadow organization that controls the world behind the scenes by making up or using conspiracy theories.

BoJack Horseman extrapolates the negativity of Hollywood amidst its glitz and glam. It’s a tragic comedy that can be depressing to binge watch for some of us. The series follows an anthropomorphic horse named BoJack Horseman, a washed-up star of a 1990s sitcom who plans to revive his career. The show might resonate with millennials who face one crisis after the other.

Castlevania is an animated dark fantasy action series that is based on a Japanese video game series of the same name. All four seasons of the show have been praised for their storytelling, voice acting and animation style. The series starts with Count Vlad Dracula Tepes, who decided to wage war on all of Wallachia after they murdered his wife. A small team banded together to try to stop him.

Satoshi Kon’s Magnetic Rose has been touted as one of the best space horror stories ever and it’s now available to watch on Youtube. Magnetic Rose is the first of three short films included in the 1995 anime anthology film entitled Memories. It follows the crew on The Corona, a space roaming freight ship that salvages materials from wrecked spaceships when they respond to a distress signal. They soon experience paranormal encounters onboard.

Futurama is a workplace sitcom and tells the adventures of a professional slacker Philip J. Fry. He was cryogenically preserved for 1000 years and revived in the 31st century. In this new century, he found work at an interplanetary delivery company and works with a host of interesting characters.

Gravity Falls is a dream for people who love a good supernatural mystery. The animated series follows twins Dipper and Mabel Pines. They are sent to spend the summer with their great-uncle Grunkle Stan, who lives in a mysterious town full of paranormal incidents. To add to the fun, Grunkle Stan is enterprising enough to con tourists with a tourist trap of his own called The Mystery Shack.

Belle (2021) is a Japanese animated science fantasy film that’s inspired by the 1756 French fairy tale Beauty and the Beast. The story starts with Suzu, a 17-year-old girl who lives in a rural village. She passionately loves singing but lost the ability due to a traumatic experience. She soon comes across an online space known as U, where she takes on her persona, Belle, and regains her ability to sing. As she rises in popularity in the virtual world, she gets entangled in a hunt for a Beast.

11. Spider-Man: Into The Spider-Verse

The animated superhero film introduces another Spider-Man known as Miles Morales and the multiverse in the Marvel Cinematic Universe to a worldwide audience. New York City teen Miles Morales gets his powers after a spider bit him and soon meets his other counterparts when it is time to save the multiverse. The series is lauded for capturing the interconnectivity of comic-book universes and for some of the best superhero storytelling yet.

The Lego Movie manages to capture the attention of children and adults with its well-written lines and storytelling. It introduced a host of memorable characters such as Emmet, Bob, Batman, Lucy and Princess Unikitty. In the first film, Emmet, an ordinary construction worker, was prophesied to be the Special to save the Lego world from the cruel Lord Business. This poses a problem for some of the Lego locals because Emmet is just so not a hero.

Studio Ghibli’s works are known for their great animations, storytelling and art style. The studio co-founded by Japanese manga artist Hayao Miyazaki has produced an impeccable collection of animated works such as My Neighbour Totoro, Spirited Away, Howl’s Moving Castle, and Princess Mononoke. The films all feature a whimsical and joyful aesthetic while touching on serious topics such as environmentalism, the costs of war and youth.