Sarikei has local fruits and vegetables that can’t be found elsewhere. 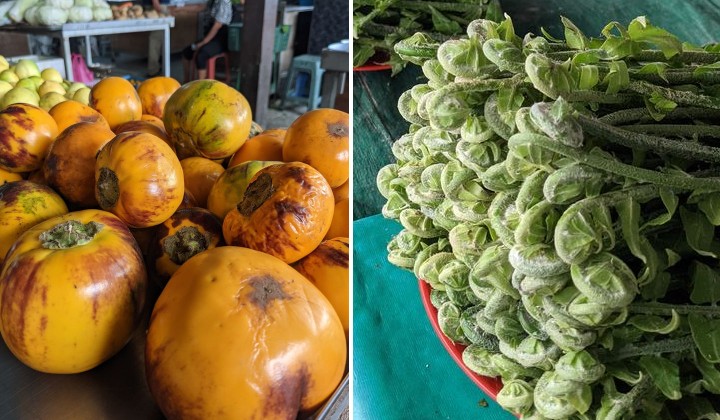 Known as the ‘Fruit Basket’ of Sarawak, Sarikei definitely lives up to its name. That’s why a trip to the local market is a must when you’re in town. Filled with vibrant colours and unusual alien-like exteriors, these exotic fruits and vegetables are sure to spark your curiosity.

Here are a few of the local produce that you might be able to spot in Sarikei:

Asam Paya is quite recognizable due to its reddish scaly skin. (Though it is also often commonly mistaken for buah salak, which looks similar but with brown scaly skin.) The exterior of the skin can be cracked open like a fortune cookie. Be careful though, the cracked skin can be pretty sharp if not handled properly.

Inside you’ll find 3 segments which contain large black inedible seeds. The flesh of the fruit is mostly sour with a slight acidic flavour to it. It is often served together with raw fish to make the traditional Melanau dish, Umai, which is the Sarawakian version of Sashimi.

Considered as the black olives of Sarawak, Dabai looks like any other olive you’d find in your local supermarket.

Although it may look like an olive on the outside, its yellowish white flesh has a creamy texture to it like an avocado. It’s usually preserved in spicy black sauce or served with soy sauce for an extra burst of flavour.

Shaped like a giant cannonball, the Asam Embang is actually a wild jungle mango. It gives off a very aromatic sweet smell just like any other mango.

However, what makes it unique is the texture of its flesh. Unlike your ordinary mango, these wild mangoes have a more fibrous texture on the inside. You can eat it as it is, but if you’re not a fan of the fibrous flesh, you can opt to juice it or enjoy it as a jam like the locals do.

These fruits come from trees that can grow up to 60 metres tall. Locals are warned not to casually stand under the Asam Embang tree as being hit in the head with a giant sized mango can be pretty lethal for obvious reasons.

In a little town just 20 minutes away from Sarikei lies a place called Bintangor. Bintangor is famously known for their mass production of Limau Bintangor, which has earned the town the nickname “Bandar Limau”.

Although it shares the same shade of green as the common lime, Limau Bintangor is actually an orange. Its shape and size is exactly the same as any regular orange.

When it comes to taste, these green citrus fruits are a unique blend between sweet and sour. All in all, I would describe this fruit as a fusion of both lime and oranges. Locals often juice these fruits and serve it with ice. This staple drink that is unique to the town is known as the Bintangor orange juice.

Midin is a type of wild fern that can only be found in Sarawak. This rare fern does not last for more than a day and is best eaten fresh. Because of its perishable nature, it cannot be exported out to anywhere else.

Midin is usually picked at the wee hours of the morning by foragers, before being sold in the local Sarikei morning market.

At first glance, Midin can be mistaken as Paku Pakis, a common fern that can be found in other parts of Malaysia. Both of these ferns have a similar curly end at the tips of their stalks. But if you take a closer look you’ll realise their differences.Paku Pakis has more triangular leaves that are light green in colour, whereas Midin has a reddish-brown tint on its leaves.

To preserve its fresh flavours, locals tend to cook Midin as simply as possible by just adding in some garlic and a little belacan (shrimp paste).

Terung Asam, which is commonly known as the Sarawakian brinjal, is probably the most distinct vegetable in Sarawak.

Its exterior is usually bright yellow with dark purple and green variegated stripes. The flesh of the Terung Asam is orange in colour with the aroma and consistency of a tomato.

When it comes down to taste, it is mostly sour with a natural tangy flavour. A combination of Terung Asam with smoked Lumek fish is the ultimate recipe for the staple Sarawakian comfort food, Terung Dayak Soup.

If you’re attempting to whip up a bowl of this delicious dish, you should note that Terung Asam takes longer to cook than the normal eggplant.

All these fruits are local specialties that can only be found in Sarikei, which means that if you want a taste you would have to visit the quaint town for yourself.

Sadly, almost all of these delicious fruits and vegetables will not survive being shipped over to West Malaysia, rendering them a well-hidden, though terrifically yummy, secret.

Still, with local tourism getting back on its feet, maybe it’s time to plan a visit to the beautiful state of Sarawak.

If you’re heading over, why not visit these hidden gems along the way?

READ MORE: Here Are The True Hidden Gems Of Sarawak You Must Visit!