The story of Niulang and Zhinu, also known as the Cowherd and the Weavergirl, has been around for centuries. 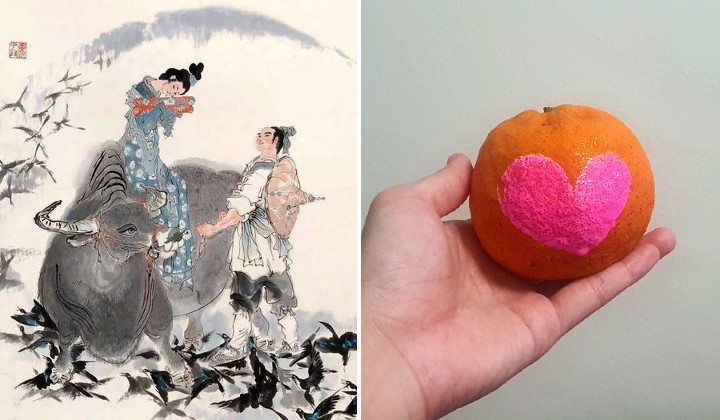 Valentine’s Day is coming up next week on 14 February, and the kicker is: so is Chap Goh Mei, the day after on 15 February!

In case you’re not aware, Chap Goh Mei is also colloquially referred to as “Chinese Valentine’s Day”, likely because they often land around the same time.

Although Chap Goh Mei merely signals the 15th and final day of Chinese New Year, it is also used to ‘search for your soulmate’. Traditionally, single women will write their contact details onto a mandarin orange and toss it into a body of water, where single men will wait to fish for love.

However, despite the exciting promise of a potentially romantic meet-cute, Chap Goh Mei is not the only “Chinese Valentine’s Day” that celebrates love.

The Qixi Festival falls on the seventh day of the seventh month on the lunar calendar. Since 2,600 years ago, people have celebrated it as the day of romance, as it is the day that legendary lovers Niulang and Zhinu are allowed to meet, once a year.

On this day, men and women make prayers and offerings to help in their love live. Traditionally, women would make prayers in regards to finding a good husband and display their domestic skills, such as cooking and weaving.

In modern times, people simply celebrate the day with their significant other, much like Valentine’s Day!

The story of Niulang and Zhinu is also known as the Cowherd and the Weaver Girl, and probably one of the earliest records of star-crossed lovers.

The story begins with Niulang (the cowherd), who was an orphan mistreated by his brother and sister-in-law. Eventually, he was turned away from their home and left with only a broken-down straw hut and an old cow. Undeterred, he worked hard every day to make a life for himself in that old hut, spending his lonely nights alone with the old cow in the meagre shelter.

One day, as he was bringing the old cow around to graze, he stumbled upon an unfamiliar patch of beautiful forest with a crystal clear lake. Then, nine celestial maidens arrived from the sky riding clouds. They disrobed to bathe in the lake, leaving their colourful celestial robes lying on the nearby rocks.

The cowherd fell in love with the Zhinu, the youngest of the group. Suddenly, the old cow began to speak to the cowherd, saying that if the cowherd took a robe, the celestial maiden will have to marry him.

Thus, Niulang stealthily took Zhinu’s celestial robe while the maidens were not paying attention. Eventually, all the maidens left the lake, clothing themselves and ascending to the heavens. Only the youngest celestial maiden was left in a panic trying to search for her missing robe.

Niulang then appeared to return her robe, and confessed his love. Seeing that he was an honest, hardworking man, Zhinu agreed to stay on earth and marry him. They settled into a simple yet happy life with one son and one daughter. Niulang herded cows and farmed, while Zhinu took up weaving.

However, two years later, Zhinu’s father, the Jade Emperor (also known as the Heavenly Emperor) found out that his youngest daughter stayed on the mortal plane and had a family with a mortal. He flew into a rage, and sent the Queen Mother of the West with soldiers to bring her back to the heavens.

Of course, Niulang and Zhinu were deeply in love and could not bear to be separated. As Zhinu was being taken away, Niulang carried their children on a carrying pole and chased after her.

The Queen Mother of the West summoned a heavenly river to block his path to the heavens, which we see as the Milky Way. Separated on both banks of the heavenly river, the two lovers cried for each other. Their love and grief moved a flock of magpies, who flew to the heavens and built a bridge with their bodies so that the two could meet in the middle.

The Queen Mother of the West finally relented at their deep love for each other, and allowed Zhinu to meet with Niulang on the magpie bridge once a year, on Qixi.

This legendary love story has been passed down for centuries, inspiring lovers and artists for their touching devotion to each other.

But hey, perhaps you could have your own love story too, beginning with a phone number on a mandarin orange! (Just don’t go around stealing women’s clothing.)