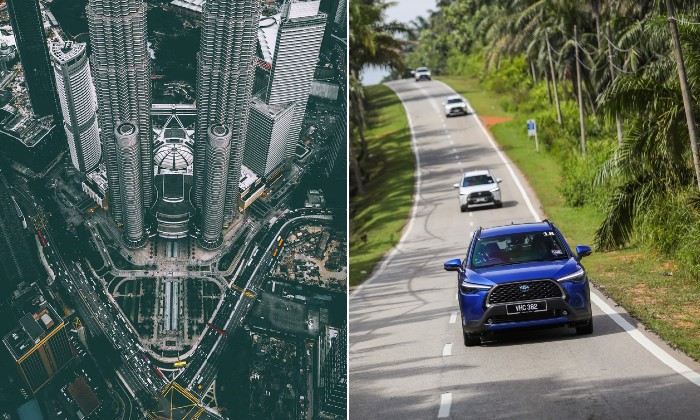 Did you know that one of the first cars ever driven on Malaysian roads belonged to the famous Penang-born, Singaporean tycoon, Eu Tong Sen who lived in Perak back in 1902?

Those days, cars were symbols of luxury, status, and gave anyone behind the wheel the bragging rights of being in the vanguard of the industrial revolution and on the cutting-edge of technology.

Fast forward to 65 years after Merdeka, cars have pretty much taken over, and the now affordable automobile gives everyday Malaysians the ability to hit the open road in our race to become a fully developed nation.

But our dependence on cars does have a toll on our environment, especially with that Climate Crisis thing going on.

Fortunately, we are on the road to making things better, much better!

Last year, Malaysia set a course to become a carbon-neutral nation and be rid of our hunger for fossil fuels by as early as 2050. To achieve this goal, we as a nation will be adopting renewable energy sources and replacing our gas-guzzling cars with energy-efficient vehicles, or EEVs for short.

Switching to EEVs like hybrid-electric cars presents the most promising road for our nation at achieving sustainability and making a leap towards a greener future, electrifying our transportation system without spending too much on replacing our current technology and infrastructure.

The country has also set in motion plans that’ll make EEVs way more affordable by providing tax incentives and other benefits to the drivers daring enough to make the electrifying jump that eventually, all of us would have to make.

We’ve already taken baby steps a sharp turn towards it with hybrid-electric vehicles.

Hybrid cars are great because they combine the use of fuel-powered combustion engines as well as electric motors and batteries as a power source.

Not only are they super energy-efficient, hybrid cars practically eliminate the “range anxiety” that some fully-electric vehicles can trigger with their very limited distance of travel before needing a power outlet to recharge and taking precious time out of your journey.

Hybrid technology has also advanced far enough that pioneering automakers like Toyota have a whole segment of vehicles that reinvents our tomorrow.

Since releasing their first mass-produced EEV, the world-famous Prius hybrid in 1997, Toyota has been at the forefront of futureproofing their line of EEVs with constant innovations and quality of life updates to make their cars more energy-efficient, comfortable, durable and safe to give those behind the wheel peace of mind over their car’s longevity and their overall impact on the environment.

The main difference between the two is that PHEVs, as the name implies, provide the option for drivers to recharge their hybrid cars with a power source whenever they want to.

Even so, Toyota’s HEVs and PHEVs are well known for their “self-charging” abilities through a process called “regenerative braking”, which allows them to recycle power that’s captured when you hit the brakes to slow down or stop the car, in order to recharge its hybrid batteries on the go.

Just picture yourself driving friends and family around in a spacious and comfortable SUV that’s built to last with Toyota’s 4th Generation Hybrid Electric Technology, allowing you to recharge while moving through slow city traffic or when you every so often get stuck on a highway crawl on a road trip through the countryside.

A car that’s enjoyable to drive and you can rely on to take you as far as you need to go with minimal fuel consumption while maintaining a small carbon footprint.

Plus, the Corolla Cross Hybrid Electric would also be the first of many locally assembled EEVs equipped with TNGA at UMW Toyota Motor’s factory, right here in Selangor, making the car affordable to produce and further reducing their overall impact on the environment.

Not to mention that saving on petrol with hybrids means more ringgits in your wallets, which is definitely a bonus.

Malaysia is genuinely ready for a greener, carbon-free car future and the road has been laid in front of us. It’ll be up to all of us to make the realistic choices that would define us for generations to come.