Many of 2022’s anticipated films were delayed for more than a year. 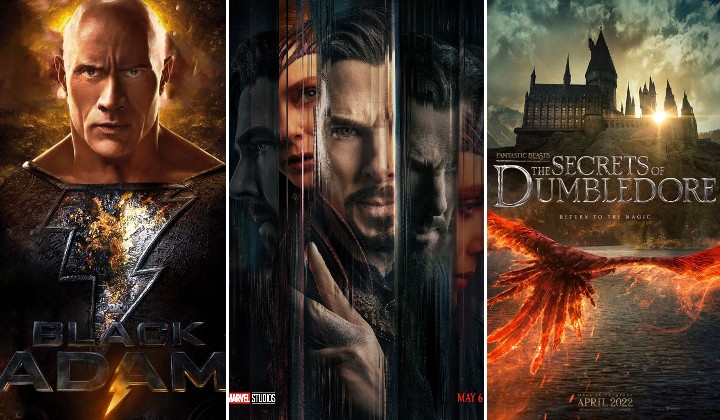 Hello there movie buffs! With a new year, comes a full list of incredible movies that we have been anxiously anticipating.

A lot of these movies were scheduled last year or a few years back due to the pandemic and also some unforeseeable circumstances. Now that they’re back on track, MARK YOUR CALENDERS!

Here are 15 unmissable movies that’s going to hit the cinema in 2022, in chronological order!

1. Death On The Nile

Following issues like the Covid-19 pandemic and Armie Hammer’s sexual abuse allegations, this film was delayed a couple of times from its initial release date in December 2019.

Summary: While on a luxurious Egyptian river steamer vacation on the Nile, Hercule Poirot (Kenneth Branagh) must investigate the death of a young heiress (Gal Gadot) during her idyllic honeymoon on the Nile cruise.

Based on a video game story, this film was in the works since June 2016 but got pushed back countless times due complicated production process and also the pandemic.

Summary: The story is a prequel to the games, showing us details of how the younger Nathan Drake (Tom Holland) came to meet and befriend his fortune-hunting partner, Victor Sully (Mark Wahlberg) while going on a dangerous pursuit for “the greatest treasure never found” and also his long-lost brother.

What should have aired in June 2021 was pushed back to this year in March.

Summary: Two years of stalking the streets as the Batman (Robert Pattinson), striking fear into the hearts of criminals, has led Bruce Wayne deep into the shadows of Gotham City. When a killer targets Gotham’s elite with a series of sadistic machinations, Batman must forge new relationships, unmask the culprit, and bring justice to the abuse of power and corruption that has long plagued Gotham City.

Also, due to the pandemic, this Marvel film was delayed from its original July 2020 premiere date.

Summary: Dangerously ill with a rare blood disorder, and determined to save others suffering his same fate, Dr Michael Morbius (Jared Letto) attempts a desperate gamble. What at first appears to be a radical success soon reveals itself to be a remedy potentially worse than the disease, tampering with a form of vampirism.

5. Fantastic Beasts: The Secrets of Dumbledore

What should be a trilogy (Fantastic Beasts) turned into a series of five with the third film being pushed back from its initial November 2021 date due to the pandemic and also recasting of Grindelwald (formerly played by Johnny Depp and Colin Farrell).

Summary: Professor Albus Dumbledore (Jude Law) knows the powerful Dark wizard Gellert Grindelwald ( Mads Mikkelson) is moving to seize control of the wizarding world. Unable to stop him alone, he entrusts Magizoologist Newt Scamander (Eddie Redmayne) to lead an intrepid team of wizards, witches and one brave Muggle baker on a dangerous mission, where they encounter old and new beasts and clash with Grindelwald’s growing legion of followers.

6. Doctor Strange in the Multiverse of Madness

Initially should be released in May 2021, this long-awaited Marvel film was delayed because of the pandemic and also rescheduling of Spider-Man: No Way Home.

Summary: Dr Stephen Strange (Benedict Cumberbatch) casts a forbidden spell that opens the door to the multiverse, including an alternate version of himself, whose threat to humanity is too great for the combined forces of Strange, Wong (Benedict Wong), and Wanda Maximoff (Elizabeth Olsen).

This film was previously set for release in June 2021 but was delayed also due to the pandemic.

Summary: Although the plot for this trilogy-capper is still kept under tight wraps, it is said that this film will be set four years after the events of Jurassic World: Fallen Kingdom and could be about the characters dealing with the aftermath of its predecessor film.

8. Minions: The Rise Of Gru

Pushed back twice, this film was originally scheduled for a general release on July 2020.

Summary: In the heart of the 1970s, amid a flurry of feathered hair and flared jeans, little Gru (Steve Carell) is a fanboy of a supervillain supergroup known as the Vicious 6, and hatches a plan to become evil enough to join them. Luckily, he gets some mayhem-making backup from his loyal followers, the Minions. After the interview for making it in the Vicious 6 didn’t go well, Gru outsmarts them and suddenly finds himself the mortal enemy of the apex of evil.

Following its fellow Marvel film who got rescheduled again and again, Thor: Love and Thunder was also pushed back from its original release date, November 2021.

Summary: The sequel to Thor: Ragnarok and the fourth movie in the Thor saga, this story is said to be heavily inspired by Jason Aaron’s The Mighty Thor, in which Jane Foster (Natalie Portman) becomes the new incarnation of the god of thunder herself.

This film was also orginally set for release by Warner Bros. Pictures in December 2021 but the pandemic got in the way too.

Summary: Nearly 5,000 years after he was bestowed with the almighty powers of the Egyptian gods—and imprisoned just as quickly—Black Adam ( Dwayne Johnson) is freed from his earthly tomb, ready to unleash his unique form of justice on the modern world.

With the pandemic and also production shutdowns caused, this film was delayed a couple of times from its original date on July 2021.

Summary: The plot or proper synopsis is not revealed yet for this film but we can expect that this film is set after the events of Mission Impossible 6: Fallout and we’ll see more on the emotional development of the cast as described by McQuarrie.

This Sony Pictures animated film was set to be released on April 2022 this year but got pushed back a few months after to October.

Summary: Miles Morales (Shameik Moore) returns for an epic adventure that will transport Brooklyn’s full-time, friendly neighborhood Spider-Man across the Multiverse to join forces with Gwen Stacy (Hailee Steinfeld) and a new team of Spider-People to face off with a more powerful villain.

This film was previously scheduled for May 2022, after the rescheduling of its fellow MCU phase four films and of course, after the tragic passing of our beloved Chadwick Boseman as the original Black Panther.

Summary: In an official statement by Marvel Studios, Black Panther: Wakanda Forever will continue to explore the incomparable world of Wakanda and all of the rich and varied characters introduced in the first film. It is also said that the film will also focus on T-Challa’s sister, Shuri (Letitia Wright).

14. Aquaman and the Lost Kingdom

Directed by James Wan who is Malaysian-Australian, this show started filming in June 2021 and ended in December 2021. Can’t wait!

Summary: Going a bit deeper in the Aquaman mythology than its previous film, when an ancient power is unleashed, Aquaman (Jason Momoa) must forge an uneasy alliance with an unlikely ally to protect Atlantis, and the world, from irreversible devastation.

After pushing back the release date about eight times starting from 2014, this movie is finally going to be here this year (let’s hope so) with new appearances such as our breathtakingly talented Malaysian born actress, Michelle Yeoh.

Summary: Set after 12 years after the first film, Jake Sully (Sam Worthington) lives with his newfound family formed on the planet of Pandora. Once a familiar threat returns to finish what was previously started, Jake must work with Neytiri (Zoey Saldana) and the army of the Na’vi race to protect their planet.

There you have it, browse more upcoming movies this year over here.

See you at the cinemas!