For many of us, the day begins with a cup of joe, but Wei Kai indulges in a dose of inspiration, too. 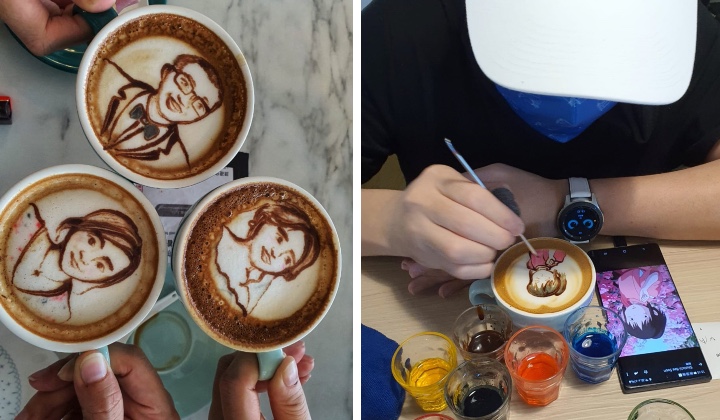 Malaysians are known for their love of coffee, but while most enjoy espresso for its taste, former journalist Wei Kai appreciates it for its creative potential.

He turns coffee into works of art that look like paintings.

The ex-journalist at Nanyang Siang Pau began his journey of creating coffee art by chance several years back.

One day, the former crime reporter came across a Japanese documentary on coffee art.

Inspired by what he saw, Wei Kai grabbed a spoon and used it to guide the colorful liquid around the white space of a cup of coffee.

Today, Wei Kai continues to use spoons in lieu of a paintbrush, but he also uses metal sticks to achieve intricate details.

From anime sketches to portraits of the human face, Wei Kai takes inspiration from everywhere.

He also recreates festive moods in his coffee art style. Sometimes, he would help create coffee paintings for special occasions, such as wedding proposals.

He has drawn characters from Disney, Studio Ghibli, Snoopy, One Piece, Crayon Shin Chan and even movie characters such as those in Squid Game, using syrup as a pigment.

A Painting For The Price Of A Coffee

They say that successful people continuously question themselves.

Likewise, Wei Kai had his concerns when he started the venture, especially in terms of sustainability.

He started off by sharing a shop lot with a hair salon in Cheras back in 2014.

Some two years later, he upgraded to an entire premise, which he named Bookmark Cafe.

“The reason why I chose the name Bookmark is because I love books and my lifelong dream is to run a coffee shop with a little library in it.”

Years later, he opened another outlet in Petaling Jaya.

Ain’t A Bed Of Roses

It hasn’t been smooth sailing, especially since the Covid-19 pandemic.

Business took a nosedive, but he persevered and constantly explored new menus and made full use of social media to reach out to coffee lovers.

Wei Kai said his satisfaction comes from seeing people having good memories over coffee and fellowship.

On busy days, he could easily draw more than 100 coffee arts per day, and he would draw whatever the customers request.

Most of his customers would not miss the chance to take a photo of their cuppa and share it on social media.

They appreciate him for giving them Instagramable moments.

People say that to discover a child’s talent, the secret lies in allowing kids to discover their interests.

Wei Kai had never attended drawing lessons as a child. But in drawings, he found excitement like no other.

When I was young, the was no easy access to Internet like today. I learned to draw from cartoons in newspapers and magazines.

Wei Kai on how he learned to draw