Today, there are few reminders of Malaya’s glorious 19th-century and pre-Merdeka past. 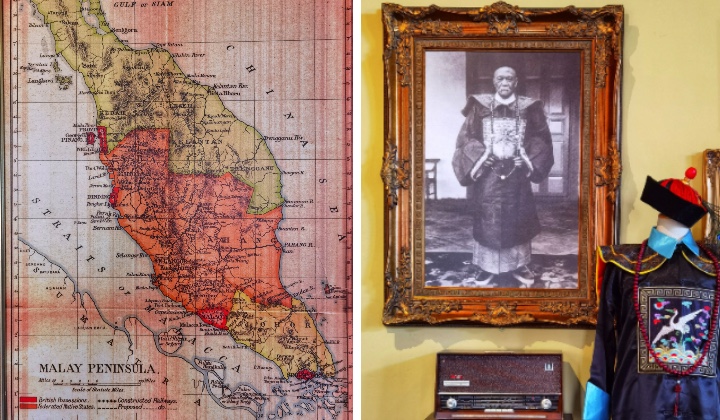 From the start of the British colonial era to pre-war Malaya, the tin-mining industry created untold wealth for the overseas Chinese to flaunt their wealth.

Rare and precious artifacts from the era can now be seen through a multifaceted lens at Phin Kee Chan, the former headquarters of Kapitan Cina Chung Thye Phin.

Thye Phin, who inherited the tin empire from his father – the famous Kapitan Cina Chung Keng Kwee – built Phin Kee Chan in Ipoh, and rightfully so.

Once upon a time not too long ago, Ipoh was the center of one of the world’s biggest tin mining towns.

Completed in 1905, the three-story building survived the passages of time.

It became a dispensary in the 30s until the early 2000s when it was sold to a private owner.

In 2011, history and heritage enthusiast Michael Chan bought the place and renamed it Arlene House after his wife Arlene Loke.

A New Lease Of Life

After much labor of love, Arlene House is now a treasure trove of entertaining and informative exhibits.

Chan, together with his wife, returned Phin Kee Chan to its former glory with more than 10 years of preservation, conservation and restoration work.

With the theme ‘Made In Ipoh’, Arlene House takes visitors on a journey of history and heritage edutainment.

Arlene House has sections on the different era that marks the pre-Merdeka history while exploring artifacts thematically such as war and plunder, personal luxuries, trade and sensual pleasures.

Arlene House owner and curator, Michael Chan to TRP on the purpose of Arlene House

Chan took great pains to fill the place with wide-ranging items from the colonial days, such as a gramophone, Mandarin robe, gambling table, Baba Nyonya bed and more.

He also replicated the Kapitan’s working desk, complete with the office equipment of that era such as a vintage cheque writer, a marble sculpture tray and an abacus.

Arlene House also turns back the clock with old photographs, posters and illustrations.

At the same time, the place evokes the memories of youth with games and toys of yesteryear.

Chan said it was by chance that he came across the building sometime in 2010.

My wife and I knew its existence much earlier but did not really give it much thought. Neither did we notice its detailed built heritage until we admired it from afar. Its charming architectural designs and trademarks were unfolded when we scrutinized the facade carefully.

When he came up with the idea to turn the place into a museum, Chan was met with skepticism and ridicule.

The place was run down and required substantial money to give it the facelift it deserves.

Family and friends advised him against the idea as they consider it to be financially risky.

But Chan, who worked as a corporate advisor previously, took the risk and decided to give it a go.

We hope that history and heritage will connect with Malaysians of all ages and background because it shows that we all share a common origin, and the nation had come together because of the people.

Arlene House owner and curator, Michael Chan to TRP on the value of history and heritage

Among the challenge was deciding which objects to put in.

It had to be something beautiful but also something with a really interesting story.

The Man From China

This year marks the 200th anniversary of Keng Kwee’s birthday.

But who is he?

According to Lillian Tong, president of the Persatuan Peranakan Baba Nyonya Pulau Pinang, both Keng Kwee and his son Thye Phin were prominent tin miners, with Thye Phin being the last Kapitan China of Perak and Malaya.

A philanthropic millionaire and a pioneer in the field of tin mining, Keng Kwee is the founder of the modern city of Taiping in Perak.

Keng Kwee was also among the first in Malaya to own an automobile, the Ford Model T.

READ MORE: From Gangsta’s Paradise To Nature’s Sanctuary: Taiping Lake Gardens Was Once Home To The Triads

Based in Penang, he was revered by the Chinese and European communities in the Straits Settlements during the British colonial period. His survival in the turbulent era was due to his position as leader of Hai San, a Chinese secret society in British Malaya during the Larut Wars from 1862 to 1873.

He was one of the six members of the Perak State Advisory Council appointed by the British Straits government.

When he passed away, Thye Phin, who is the fourth son, took over the family business.

When Thye Phin passed away in March 1935, he was said to be the wealthiest man in Penang.

Why We Must Remember

The exploits of the Kapitan Cina, he said, are not only valuable for the nation’s history and heritage.

Their insights into the political contexts, the trading networks they established, and the partnertship they forged with the Malays, would help present generations to appreciate the nation’s racial diversity more thoroughly.

He said the stories of the Kapitan Cina will increase Malaysians’ cultural awareness and moral understanding of the world we live in.

A book to mark Chung Keng Kwee’s bi-centennial celebration will also be published.

At the same time, a gala dinner attended by descendants of Keng Kwee and his Malay partner Ngah Ibrahim was held in Taiping.

Admittedly, much remains lost to the pages of history due to a lack of written accounts, especially concerning the everyday life of the common people from the era.

Yeap expressed hope that the void will spur the desire for informed citizenship and critical thinking, to research and to raise general awareness among the public.

Gaining knowledge and understanding of historical events and trends, especially during the colonial period, allows us to develop a much greater appreciation for where we are today.