Their brand may sound foreign, but they’re either created by Malaysians or in Malaysia. 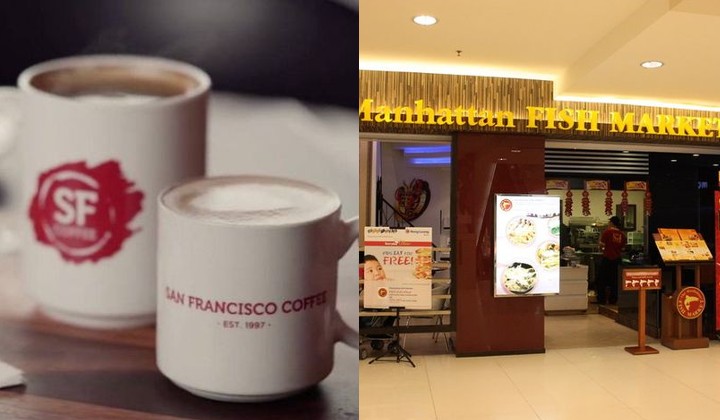 You probably thought Milo and Maggi were Malaysian brands, didn’t you? Well, we hate to burst your bubble but they’re in fact, not from Malaysia. Milo is from Australia while Maggi is from Switzerland. Mind-boggling, isn’t it?

But we bet you think these guys however are from international waters. Think again. These are actually Malaysian brands! Time to be proud, dear Malaysians.

San Francisco. The name itself… Yes, they do have a lot of coffee shops over there, but surprisingly, this brand of San Francisco Coffee isn’t from the United States.

Did you know that San Francisco Coffee was the first gourmet coffee franchise in Malaysia, even before Starbucks and the Coffee Bean?

It was founded by Robert Boxwell in 1997, an American FROM San Francisco who came to Malaysia for a business trip. During his visit, he noticed the absence of coffee culture here at the time and decided to start a business with his friends.

The brand is currently owned by Lyndarahim Ventures Sdn Bhd under Datuk Abdul Rahim Zin and this coffee franchise has over 40 outlets in Malaysia. Give or take.

Yes, this isn’t from the States as well. The idea of it was, though.

Founded by a group of young Malaysian entrepreneurs, George Ang, Dr. Jeffrey Goh, and Dickson Low, they drew inspiration from the reputable Fulton Fish Market which was once located below the iconic Brooklyn Bridge.

They saw an opportunity to serve Malaysians American-style seafood cuisine and opened their first outlet in Mid Valley Megamall in 2002.

Fast forward to a couple of years, they’ve successfully expanded their restaurant chain in countries like:

Currently, the MFM is owned by Revenue Valley Sdn Bhd who also handles other famous restaurants such as Tony Roma’s and NY Steak Shack.

You must think that Appeton was imported from some European country, right? Nope. It’s Malaysian-based, peeps.

The iconic and colorful Vitamin C supplements that we used to get from our mothers when we were young are actually made by a local pharmaceutical company called Kotra Pharma.

Now headquartered in Cheng, Malacca, Kotra Pharma was founded in 1982 and they launched their most successful product, Appeton in 1989. This company also later released other brands such as Axcel and Vaxcel.

Isn’t Beryls from Belgium or something? Not in this world.

Did you know that this brand was originally named Real Chocolate? It was established in Desa Serdang in 1995.

They changed their name to Beryl’s Chocolate and Confectionery Sdn Bhd in 2000 and moved their production to Seri Kembangan Industrial Area.

They also have a Chocolate Museum Tour in their factory. Willy Wonka Chocolate enthusiasts can visit and learn how premium quality chocolate is made from cocoa beans sourced around the world. Exciting.

Beryl’s has victoriously penetrated the market both locally and overseas and can be found in over 15 countries around the world. Awesome.

Another chocolatier from wait for it… Malaysia. You would think that based on the company’s name, Maestro Swiss, this group would be from Switzerland, but that’s just not the case.

They were first established in 1999 and they are also the ones who produce Vico (chocolate malt drink) and Darry’s (Sweets).

Their products are distributed among 17,000 outlets in East and West Malaysia. They also export their products to more than 20 countries worldwide. Way to go Malaysians!

So there you have it. Some of the brands you think are from overseas but are actually from your own country.

Some other honorable mentions include Marrybrown, Carotino, Secret Recipe, Munchy’s, and Gardenia.

[Updated] GE15: Got Your Finger Inked? You’re In For A Treat This Election Day