We all deserve a relaxing beach vacation at one of Malaysia’s top tourist spots. 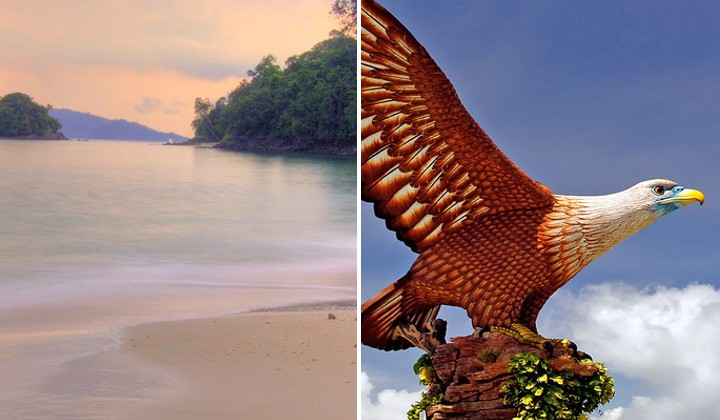 LANGKAWI… *relaxed sigh* One of the most beautiful and recommended places a tourist can go. After all, it was the first place to open up as a Travel Bubble because Malaysians missed it so much!

There’s also plenty of places to go and things to see, such as Mahsuri’s Tomb, Cable Cars at Gunung Mat Cincang, Eagle Square, Telaga Tujuh Waterfalls, I mean the list just goes on and on.

But what if your sole purpose of going to Langkawi is just to relax? Lay down, unwind, take a deep breath, and just enjoy the scenic view that the island has to offer. What better way to do that than chillaxing at the beach?

Here, let’s take a moment to fully immerse ourselves in the panoramic beaches here in Langkawi. Let’s go!

1. Pantai Cenang – Most Famous Of Them All

Cenang Beach is famous for its family-friendly activities and also water activities. Located in the western shoreline of Langkawi, Cenang’s expansive beach strip is ideal for sunbathing, strolling around the sand, and enjoying picturesque sunset views.

If you love sunbaths, you can rent out beach or lounge chairs and umbrellas right on the beach. For family calmness, you can find a spot for a picnic and go for a swim over there.

But remember, do not litter! Be a responsible human being and let’s take care of our beautiful ecosystem, shall we?

For most of you, you might know that this is actually the most popular public beach in Langkawi to both tourists and locals. It actually is the busiest too.

However, the upside for this is that, with more tourists, attractions and public facilities are ubiquitous. Water sports like jet skiing and parasailing are common at the beach. Meanwhile, cafes and restaurants are always near if you need to get a bite after those long walks and strenuous swimming.

Apart from that, Cenang also houses the Underwater World, Rice Garden Museum, and various spas as well as resorts for those who seek a touristy vibe.

Located just a stone’s throw away, Pantai Tengah is actually an extension to Pantai Cenang, located just a bit south of the famous beach, and provides a more tranquil atmosphere.

This shoreline is quieter and calmer compared to the latter which is bustling with tourists and shops.

There are a few chalets, spas, bars, and resorts over here for a laidback vacation. Watersports activities like parasailing, jet ski, and banana boats are also available here and some operators may even offer boating and other tours.

This is the part where it gets interesting. For those who want an experience traveling to loads of islands, then the Island Hopping Tour is for you. You can find out more about the tours and what to do in Pantai Tengah here.

Known as one of the best shorelines in Langkawi, Tanjung Rhu beach offers a mesmerizing view of the glistening golden sand and crystal emerald water.

Located in the northeastern part of the Langkawi island, this beach is known for its abundance of Casuarina trees, hence, the name “Rhu”. This beach is divided into some private areas meant for resorts and a public space meant for those who are just passing by.

Other than just gawking at the scenic views here, tourists can also go on snorkeling or paddleboat adventures organized by some private parties.

Not a fan of taxing activities like that but you’re still an explorer deep inside? No worries. You can explore the mysterious mangrove swamp on a tour with the said parties such as the Tanjung Rhu Resort, Four Seasons Resort, Tanjung Rhu Villas & Co, and more.

Pantai Pasir Hitam is named as such for its deep black sand, but why is the sand here black to begin with?

Some said it was a war torn between a Roman prince and a Garuda (the mythical bird, not the airline). The Garuda kidnapped the Princess of China which was the prince’s fiance, and so they battled. The sand became black due to the remnants of the romantic but fierce act of war. Talk about cliche huh?

The next theory is also on war where the dispute was between two kingdoms called the land and the sea kingdoms. A warrior from the land kingdom suggested for their team to burn a lot of firewood to confuse the enemy at night and weaken their spirits. Guess it worked.

Now another theory points to the legend of a curse jinxed by a mermaid to a fisherman who stole her ring.

Other than that, some also assumed that the blackness is caused by a cement factory nearby.

Whichever it is, the north located beach of the island is near Tanjung Rhu and people come all over just to witness the semi-black sand that is actually caused by minerals like Tourmaline and Ilmenite from the granites of Mount Raya. You can’t really swim here, but sightseeing is a must.

Close to the Temurun Waterfall, this is one of the most underrated beaches on the northwestern part of Langkawi. Known as the Sandy Skulls Beach, the name also has a few legends to it.

Some say that the skulls came from the bodies of pirates and sailors washed up by the shore after a huge storm.

Some also believed that a sea monster was to blame for all of its victims. Others suspect that the bodies that were washed here were those of escaping prisoners from the Ku Taruto island prison.

Another legend suggested that a war- again, broke down between two mythical birds, the Garuda and the Jentayu in which led to a series of warriors facing their doom on the beach. What is it with legends and wars huh?

Which version is true, well, we don’t know. But stories are just stories. Fun and interesting to hear.

The beach over here is smaller than the others but definitely less crowded due to it being quite the farthest from other tourist attractions. That means, no watersport activities, just a calm blue, and white landscape to have picnics with.

However, locals usually warn on the dangers of monkeys and jellyfish around here, so keep an eye out for them.

So there you have it, a few of the best beaches in Langkawi. Been there before? Would you recommend it to others?

Planning A Trip To Genting SkyWorlds? Check Out These 7 Nifty Tips First