The man claimed to be on patrol but it was later revealed he wasn’t even a security guard. 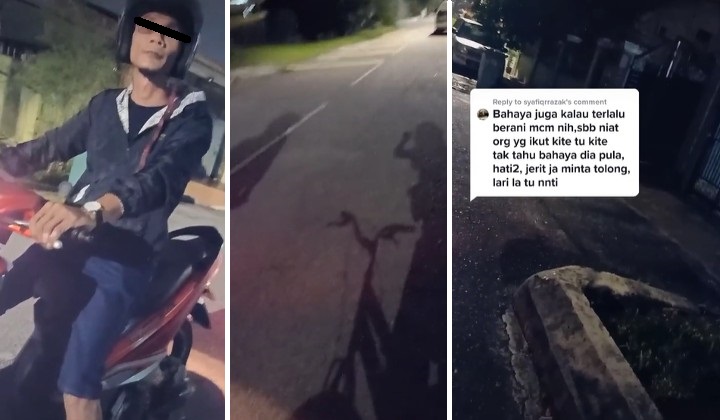 The majority of women in this country don’t feel safe wherever they go.  That’s a fact.

There was even a parody of it in a video where a woman walking alone was relieved to find a Pontianak (female vampire) in her car instead of a man.

Just goes to show that truth is scarier than fiction and this viral TikTok video posted a few days ago is a testament that you can’t even go cycling in peace without some creep who doesn’t know how to mind his own business.

The video was posted by TikTok user psychomoonchildbuddy three days ago and has amassed over 1.5 million views to date.

It starts with the woman asking the man on the motorbike why he was following her.

Without giving a direct answer, the man later claimed he was a security guard and questioned why she was out late at night.

The man then also asked her several times where she lives to which the woman told him that it was none of his business.

The 3-minute video was an uncomfortable watch with the woman’s voice noticeably trembling and furious asking him to go away.

In another video, the woman can be heard screaming for help but she claimed people only came out to see what was happening from inside their gates.

Events leading up to the stand-off

Following the initial video, psychomoonchildbuddy explained what happened prior saying she was out cycling after work at 8 pm until around 10:30 when the incident happened.

She saw the man coming towards her from one side of the street and after changing her cycling route a few times, she noticed the man did too which made her realise she was being followed.

In an update posted yesterday (28 October), the woman posted that a police report has been made.

It was also confirmed that the man was NOT a security guard and if he’s seen again, he could be arrested.

The woman thanks her followers for their concerns and then warns people to never believe strangers who claim to be security personnel.

What to do in this position

Several netizens took to her posts to advise she shouldn’t have been out so late.

While this may hold some truth, harassment can happen at any time of the day.

There are some measures you can take to ensure your safety such as: