The young philanthropist is Krishh Haran Nair and his good deed makes him the youngest donor of the Sultan Ibrahim Johor Foundation. 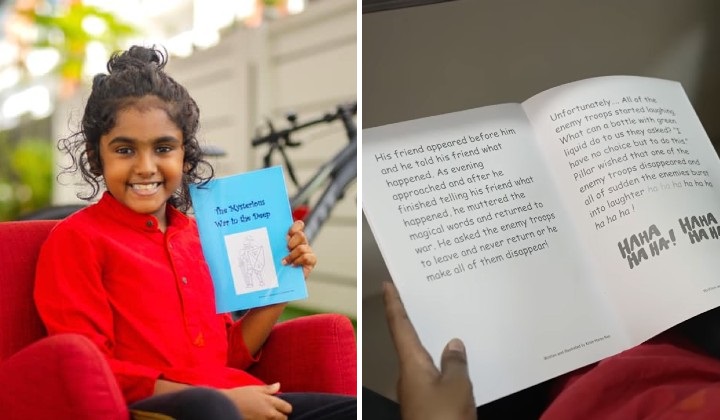 Amazing things happen when you’re kind, and for 8-year-old Krishh Haran Nair of Johor Baru, his compassion led him to write a book and use all the proceeds made from sales to benefit charity.

Krishh, with some help from father his Ramakrishnan Nair, managed to raise over RM7,000 which was then used to buy about 100 boxes of groceries with items like canned goods, rice and noodles.

The boxes were then donated to the Sultan Ibrahim Johor Foundation, in his hometown.

His charitable deed did not go unnoticed and gained the attention and praise of The Sultan of Johor, Sultan Ibrahim Sultan Iskandar.

Empathy from an early age

Krishh has always been passionate about helping people from an even younger age, said his father.

He has always had this compassion towards those in need. When he was little, he would ask us to help the homeless whenever he sees them, and cry until we do something to help the people.

Even at restaurants, Krishh is said to approach people and ask them if they need any food.

The good deed that opened hearts and minds

With the pandemic sparking off an unemployment trend and many businesses closing down, instances of Malaysians needing assistance financially or otherwise increased dramatically.

Concerned about the well-being of people, especially the poor and needy during the Covid-19 pandemic, Krishh started his ‘fundraising’ project in July.

What started as an assignment by his online tutor, became a philanthropic passion project.

Krishh spent one month writing a short story entitled “A Mysterious War to the Deep”.

It was later published as an e-book and printed copies were made with the help of his parents after he spoke to them about selling his story to raise funds for the needy.

In a video feature on Sultan Ibrahim Sultan Iskandar’s Facebook, Krishh described the humble process of getting the word out about his book:

We took a voice recording of me to say I made a new book, and we sent it in Whatsapp so everyone would know. And then many people started buying it and we got a lot of money.

Krishh Haran Nair, 8, author of “A Mysterious War to the Deep”.

He started by sending the books out to his friends and relatives. But, when others caught wind of his initiative, said Krishh’s father, people paid up to a few hundred ringgit just to support it.

Copies of the book were also purchased by a Tamil school in Negeri Sembilan.

“An inspiration and a leader for others”

Even after the honourable mention by Sultan Ibrahim, Krishh is still a regular kid who loves to play football, swim, and has musical interests in the drums and the ukulele.

Aside from writing, he is also big on doodling.

“A Mysterious War to the Deep” sells for RM5 and if you wish to support Krishh’s initiative by purchasing his book, email jayanthimarlin@gmail.com.