The ‘Pearl of the Orient’ has a dark history that’s not so shiny. 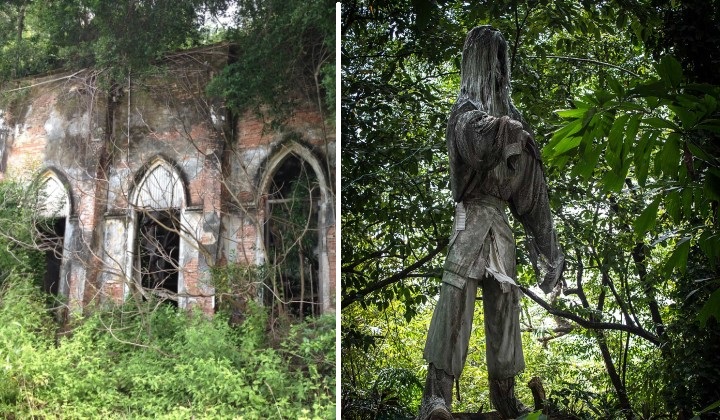 Dark tourism; Sabah is embracing it, Klang Valley has a fair share of unofficial sites, and Penang is the crème of the crop for it in Malaysia.

Read More: Klang Valley’s Most Notorious Dark Tourism Sites, And The Stories Behind Them

Since dark tourism revolves around visiting places that are historically associated with death and tragedy, Penang is no stranger due to its role as a major port during the British colonial times, and again during the tumultuous Japanese occupation.

Channel the dark tourist in you next time you visit the Pearl of the Orient and read about our top picks that are bound to intrigue you.

It’s garnered global attention for being one of the top 10 most haunted sites in Asia after it was featured in an episode of National Geographic’s “I Wouldn’t Go In There”.

It was first used as a military fortress built by the British in the 1930s and then during World War II, it fell to the Japanese and was used by the Japanese army to detain prisoners of war.

Acts of torture and other cruel deeds were carried out as a result of these war atrocities.

Dubbed as ‘Bukit Hantu’ (Ghost Hill) because of its history of deaths, the fortress was abandoned for decades after the Japanese surrendered.

It was then restored and opened as a war museum with some artefacts still in place, like the guillotine that was probably used to chop heads off.

Off the eastern coast of Penang Island, a short ferry ride from the town of Bayan Lepas is what regular tourists would deem as a spot for Instaworthy photos, a beautiful sunset and a place to relax at their island resort.

Dark tourists on the other hand will want to know about its not-so-beautiful past.

For example, during colonial times a prison once stood where prisoners were purportedly tortured and mistreated.

Research Michael Gibby told FMT that the island was used as a screening centre and quarantine place before immigrants could enter Penang and other parts of Malaya.

How to get there: Head to the Pulau Jerejak Jetty in Bayan Lepas. Service starts at 6:30am and its last trip to Penang Island is at 11:30 pm.

Social history researcher Clement Liang claims the mansion was once owned by one of the richest families in the United Kingdom known as the Ramsden family.

John St Maur Ramsden, the grandson of the family living there, was said to have been shot dead in the mansion by hitmen that his jealous relatives had purportedly hired. The rest of his family were later killed during the Japanese invasion.

While that story in itself is already dark, it gets darker when a bomoh (witch doctor) who visited the mansion claimed the area surrounding the house ‘wants’ back the land on which the house was built.

Apparently, his regular summoning of spirits at the home created a gateway through which evil can roam throughout the mansion. It’s sometimes dubbed an airport for ghosts.

*Note* this is private property and if you plan to visit, obtain prior approval from landowners and/or relevant authorities.

Although there are no significant “ghost stories”  behind this abandoned hotel, the site has been used a few times as a film set for its eerie-looking appeal.

Built in the 1880s, it functioned as a hotel until World War II when it was claimed by the Japanese and left abandoned following the war.

For a more light-hearted approach to dark tourism, which may even scare you more than the places where real and tragic deaths happened, is this quirky experience that invites you to “Come on and scare our ghosts”.

They have two branches, one of which we’ve already featured in Melaka.

Read More: 5 Things To Do In Melaka When It Opens

Much like its sister site, this museum features ghostly scenes featuring dressed up mannequins and is said to guide you through local dark culture and history.

Klang Valley’s Most Notorious Dark Tourism Sites, And The Stories Behind Them

Dark Tourism In Sabah & Why We Are Drawn To The Macabre