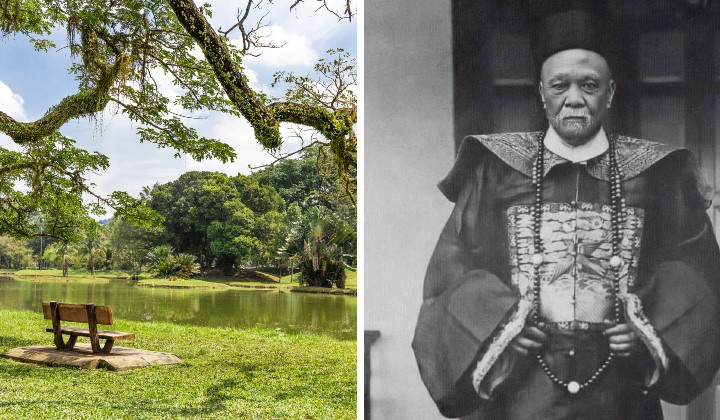 Lucky are those who live in Taiping, for there are many interesting tourist places to visit.

The most famous is undoubtedly the Lake Garden or Taman Tasik Taiping, which used to be a tin ore mining site.

Measuring some 64 hectares, it is the first public park in Malaysia.

Rainforest trees line the lake, while animals such as monkeys, deer, parakeets and hornbills inhabit the gardens. There are rowboats, walking tracks, cycling lanes, playgrounds and skating rinks for visitors.

The Lake Garden also has beautiful landscapes such as bridges, islands and pagodas– evoking a serene atmosphere for nature lovers.

However, unknown to many, the Lake Garden was gifted to the Perak government by Kapitan Cina Chung Keng Kwee, a migrant from China in the 19th century.

But they did not write back home afterwards. Keng Kwee’s mother, Madam Lai became worried and sent her son to look for the duo.

He eventually found his father and brother in Klian Pauh (renamed Taiping after the Larut Wars ended). They had prospered as businessmen.

Keng Kwee did not return to China immediately but went to work as a tin miner in the district of Larut where Taiping is located.

Ever enterprising, he became the first miner to introduce the use of the hydraulic pump.

In an age of chaos where intrigue and double-dealing reigned supreme, he rose to prominence and became head of a secret society.

Keng Quee was head of the Hai San, a very powerful and much-feared secret society locked in a series of fighting known as the Larut Wars with their bitter rival, the Ghee Hin.

The secret society thrived on revenues from gambling, opium dens and brothels that mushroomed in mining areas.

But the Chinese have a saying that one mountain cannot contain two tigers.

Hai San contended for supremacy against a rival secret society, Ghee Hin. Their rivalry contributed to the Larut Wars that began in July 1861 and only ended in 1873.

In the ensuing power struggle, Keng Kwee outwitted and outlived his rivals.

He drowned his own niece and Lee Ah Khun, the leader of the Ghee Hin Kongsi for committing adultery.

Finally, Keng Kwee had secured power in Larut. In what is perhaps an unwitting precursor to the Keluarga Malaysia spirit, Chung was supported by his Malay friends Long Jaafar and Long’s son Ngah Ibrahim. They were the headman and administrator of the district of Larut.

It was said that the trio was so close and had a special pact, and father and son even joined Hai San as members.

While the Larut Wars dragged on and disrupted the mining industry, Ngah Ibrahim got the British to intervene with sepoys from India.

The sepoys, which were Indian soldiers serving under the British, comprised Punjabis and Panthans (Afghan Pashtuns).

Led by British officer Captain T.C.S. Speedy, they arrived in 1873 with stores, arms and munitions for the Hai San as they sought to defeat the Ghee Hin.

The prevailing anarchy would eventually lead to signing of the infamous Pangkor Treaty in 1874, which marked the start of British colonialism in Malaya.

Unknown to many, Hai San and Ghee Hin also signed a treaty with the British at the same time. The Chinese agreed to disarm and destroy their stockade.

Keng Kwee, together with the leader of Ghee Hin, were appointed as Kapitan Cina.

He went on to prosper, securing a monopoly for tobacco, liquor, opium and gambling farms in Perak.

Not So Bad After All

Keng Kwee might have lived by the sword, but he was a philanthropist who gave back to society, including building bridges and roads, building schools, and donating large sums of money for disaster relief.

The Ching imperial court praised Keng Kwee for his act of kindness, and they gave him a plaque saying that he was an “eager public servant”.

Keng Kwee and his wife were given the honorary title of second-rank Mandarin for three generations – a highly cherished honour in those days.

In 1884, a large area belonging to the Chung family – which comprised swamps and abandoned mining pools – was drained, levelled, planted and fenced.

It was transformed into a public garden and bequeathed to the public. This became known as the Taiping Lake Gardens.

By 1911, the Lake Garden was considered the most beautiful of any gardens in the then-Federated Malay States.

Today, two streets in Penang are named after him, Jalan Ah Quee and Lebuh Keng Kwee.

His former residence in Penang is now the Pinang Peranakan Mansion.