Yusuf Madi previously won an award for his landscape photography at the Asian Geographic’s annual Images of Asia (IOA) award. 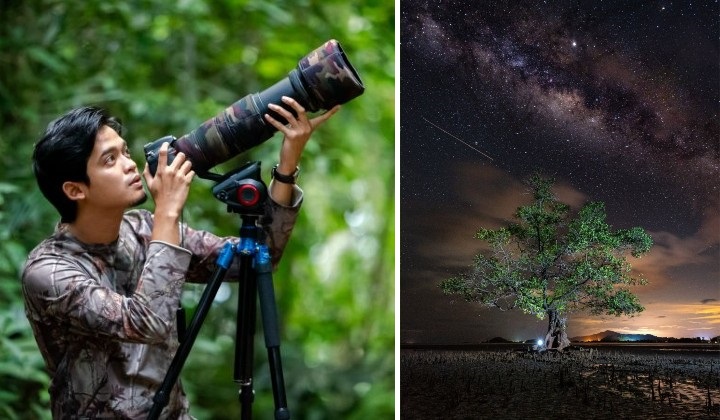 Malaysian landscape, nature and wildlife photographer Yusuf Madi has recently been given the ‘highly commended’ title for a photograph selected in the 2021 Mangrove Photography Awards in the United States.

The competition, run by the Mangrove Action Project (MAP), is now in its seventh year and aims to show the relationship between wildlife, coastal communities and mangrove forests, as well as the fragility of these unique ecosystems, both above and below the waterline.

His acclaimed photograph, titled “Shining Stars above Mangrove Tree” shows a stunning portrait of the Milky Way shining above a mangrove tree at Mersing Beach, Pulau Mawar. The area is only accessible by foot at low tide.

Yusuf’s photograph was one of 28 images chosen from a pool of 1,327 submissions.

In an interview with Asian Geographic, where he’s previously won awards for their Images of Asia (IOA) award, Yusuf first started photography by capturing various subjects with different ways of creating stories.

He later found that his passion was more inclined towards nature.

I have always loved and been obsessed with photos containing “soul” that can convey stories and create the feelings to the viewers. The truth is, we don’t create a photo with a camera, we create it with our eyes.

Importance of mangroves and photography

Mangroves are important to the ecosystem as they support the plant and people in unique ways, from providing breeding grounds for fish to carbon storage, to protection against flooding.

They are also important protection against climate change. For example, one acre of mangrove forests absorbs nearly the same amount of carbon dioxide as an acre of Amazon forest.

Despite their significance, they are also under threat with over a third having disappeared due to reclamation of land for agriculture, industrial development and infrastructure projects.

It has never been more important to promote the conservation of these fragile ecosystems through inspiring photography.

Catch The Sunrise Between KLCC Towers This Sunday