Apparently Tefal also does a bunch of other common household appliances too. 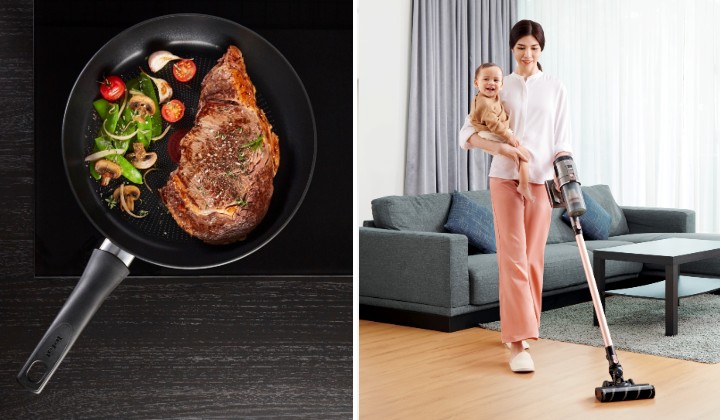 Tefal is a household name for their non-stick pans, but now they’re foraying into another kind of household appliance– handstick vacuum cleaners.

From the kitchen to the whole house

The flagship Tefal Air Force 360 Light is touted as an ultra-light featherweight at just 1.4kg in handheld mode for easy manoeuvering. It can also click into place to be a high-reach tool for those hard-to-reach places. Naturally, it comes all all sorts of attachments, such as an ultra-slim suction head for all those nooks and crannies.

The Air Force 360 Light also boasts a powerful 60AW suction with a 250W Brushless DC Motor that picks up dense materials and heavy particles around edges and corner effortlessly. In fact, Tefal claims that this model of vacuum cleaner has 100% pick-up on hard floors.

For those of us continously shocked by the amount of dirt and debris we find hiding in the house, brought in either by pets or children or ourselves, 100% pick-up sounds too good to be true! No more needing to sweep and vacuum!

No unwanted dust sticking to your floors, ceilings, or breathing air

Tefal really went all out on this vacuum cleaner as it also boasts 3 levels of filtration to ensure that hidden dust and particles gets sucked away into oblivion as well– down to the smallest dust particle!

The first level of foam filter traps and retains large particles, the second level prevents smaller dust reaching the motor and the third level has an EPA filter that traps small particles.

Flagging off on new models

To ensure that all Malaysians are given a chance to try their hand at vacuuming, Tefal will be running a nationwide game campaign that focuses on their three models of handstick vacuum cleaners.

Over the campaign period of 9 weeks, there will be 6 weekly winners to bring home cool new Tefal goods.

If you want to take part, head over to the Tefal website HERE. Campaign period runs from 1st September to 31st October 2021.