Ikmal Zaidi Hashim recently came under fire for his explanation as to why VIPs were given preferential treatment at Masjid Putra. 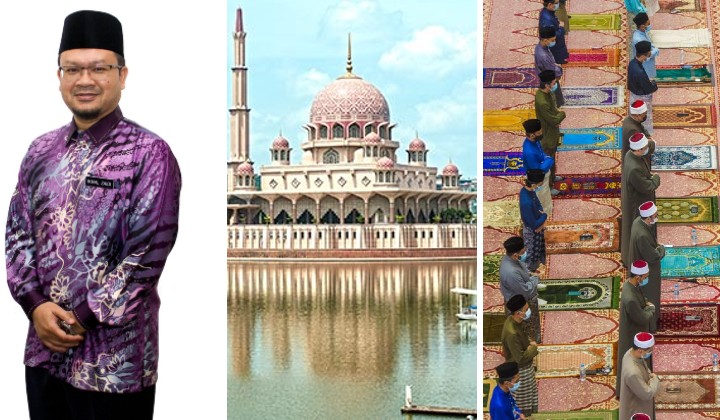 After much dissatisfaction from the public regarding a viral video of people waiting in line to enter Masjid Putra as a VIP jumped the queue, the Grand Imam of the mosque Ikmal Zaidi Hashim came forward with an “explanation” via Facebook live.

The livestream also received backlash from the public, eventually being deleted, though removing it did not seem to help the situation.

Other religious figureheads in the country however have shown a different way to deal with their own lateness.

For example, Associate Professor Datuk Dr Mohd Asri Zainul Abidin, the Mufti of Perlis, who recently said that he was late to Isyak prayers and therefore prayed outside, despite the management of mosques in Perlis being partially under his department.

“As such, I was outside, like a late person,” he said.

Another honourable mention is Menteri Besar of Negeri Sembilan Datuk Seri Haji Aminuddin Harun, who was seen praying outside too, as he was also late.

One would assume that with such examples, and after deleting the livestream, the Masjid Putra Imam would choose to not re-spark any anger, though it appears he lives by the Malay saying berani kerana benar.

Joining in on the action is Universiti Malaya Associate Professor Dr Saadan Man, whose thoughts on the matter were shared by Ikmal on Facebook.

In his post, Saadan mentions that VIPs in other places (concentrating on Masjidil Haram and other holy sites for Muslims to get his point across), get special treatment too.

He says that our Prime Ministers have entered the Kaabah, while the rest of use have no chance, and if we want special treatment, then we should become VIPs.

Ikmal’s sharing of the post though, doesn’t seem to have gained as much traction as the original by Saadan. Probably because the imam has disabled comments on his page.

Reference to special treatment in the Quran

A quick check of online resources by a layman shows that many references on matters such as these refer to a particular Surah in the Quran.

Surah ‘Abasa tells of a situation in which the Prophet Muhammad (PBUH) had made an apparent choice to favour one party, over another.

The Surah’s translation, according to Surah.my says the Prophet Muhammad had frowned and turned away when approached by a blind man.

In the following verses, his actions are questioned, as to why he turned away from the blind man.

While verses eight and nine tell of the blind man who approached “striving earnestly” and “with fear in his heart”. “Of him thou was unmindful,” says verse 10.

As mentioned in verse 41 and 42 – “Blackness will cover them: Such will be the Rejecters of Allah, the doers of iniquity.”

Another interpretation of Surah ‘Abasa comes from Quran.com, who references Saheeh International.

Looking at the same verses, the translation is as follows:

Perhaps from this Surah, in both interpretations shown above, one of the lessons we learn is favouritism, when it comes to religion is wrong.

To be absolutely clear, I don’t claim to be a religious scholar, meaning I most likely don’t know as much as the Imam or an Associate Professor, but from a layman’s perspective, preferential treatment by a mosque still doesn’t seem to sit quite right.