It was an era of unity, discovery, and progress. 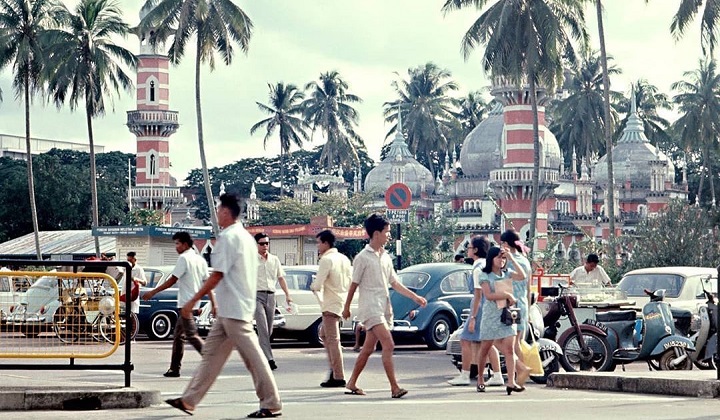 Malaysia was blooming in the late ’70s. It was a young adult, barely out of its teens, and just 20 years had passed since it declared independence.

This new freedom is reflected in its people. As new cultures, attitudes, and art were introduced to the country, Malaysians embraced them and made them their own.

V. Arumugam ‘the Spider Man’, Soh Chin Aun ‘The Towkay’, Shaharuddin Abdullah the cool guy, Mokhtar Dahari ‘Super Mokh’, Santokh Singh, and many more, were the stars on the field.

At the helm was Tun Hussein Onn, Malaysia’s third Prime Minister and the Father of Unity.

A Culture Of Unity

Alan D’Cruz (64) and Gerry Fernandez (65) were best friends since their school days, back in the early ’70s in Seremban. They recalled how extraordinary the sense of unity Malaysia had back then. Friends of all backgrounds and races would hang out, visit each other, and celebrate holidays without restrictions.

“I was in my 20s and it is impossible to talk about how it was back then without comparing it with how it is now. In the five years that I was in school, there was never a single thought of what race my friend was,” said Alan who brought along Gerry for the interview.

When the group of friends go out together, they would eat together. Each of them would order different foods based on their preferences and dietary restrictions from different stalls, but they would always sit together at a table.

“When we were involved in sports we were all supportive of each other, cheering for each other. And during festivals we would visit each other. There were no reservations about all that,” added Gerry.

Even as young men, they could see the spirit of camaraderie in Malaysia being mirrored in the field of sports. It was after all the golden age of Malaysian Football.

A Land Of Opportunity

The ’70s was a defining decade for Serbgeth Singh (61). All he wanted was to play football, challenge himself, and everyone that stood before him.

In 1977, at the age of 17, he was playing for the Kluang District football team. The very next year he was already playing for the Johor state team. An amazing feat for a kid born in a squatter colony on a plantation.

He would play football after school, bury his face in sports magazines after dinner, and give his best no matter what he did.

“Back then I didn’t whine or moan or feel sorry for myself but steadfastly gave my best if it was an English exam paper or taking a penalty in a 7-a-side match on the weekend or trying to stop Kana ( S. Sujeindran ) from scoring in training,” Serbgeth told me in an email.

He played for the National Team in 1982. You might know him as Shebby.

An Era Of Sophistication

The late ’70s was also the dawn of modernisation in Malaysia. With it came new cultures and ways of thinking that uplifted the youths at the time.

The yes of Malaysian youths were opened by studying abroad and working in foreign industries that were coming into the country.

When combined with their the drive, focus, and hunger to succeed, the young men and women of the ’70s felt invincible.

They felt like they could achieve whatever they wanted to, and do it all while looking good.

Tilak Leslie (61) admits that he did indulge in the late ’70’s look. It was influenced by whatever the hit movie was at the time.

Saturday Night Fever, Grease, and not to mention Star Wars.

“I even had an afro at the time,” laughed Tilak who is not he esteemed honorary secretary at the Buddhist Maha Vihara temple in Brickfields.

Although no one walked around in Jedi robes; afros, fitted shirts, and Barrymore collars were all the rage. It then evolved into slick back hair leather jackets and rolled up sleeves.

“Most people who were born in Brickfields tend to stay in Brickfields, there is no other place in Kuala Lumpur quite like it,” added Tilak.

There he saw fashion and styles come and go, and come back again. But that culture of unity, the passion for opportunities, and the maturity of thinking that was there in the late ’70s continued on.

Tissot embodied the spirit of the late ’70s and its lasting impression in its new and upgraded PRX Automatic, a sophisticated and young-at-heart piece with on-trend retro-aesthetics.

Precise, robust, and able to withstand pressures up to 10 bars, that is the secret behind the name Tissot PRX.

It is also a guarantee of reliability and unrivalled quality, a mark of pride of its Swiss origins since 1853.

The heart of the Tissot PRX Powermatic 80 is the mechanical self-winding movant that Tissot is renowned for.

It could outlast and outperform its competition with the ability to continue telling time, accurately, for more than three days, or 80 hours, if not worn.

But who could resist admiring one of these timepieces on their wrist where it belongs?

Its cool steel triple-blade wraps around the securely and comfortably, its matching steel case polished to a finishand tapered to a thickness of 11.3mm, and its crystal is sapphire with a hardness that is only rivalled by diamond.

The face of the Tissot PRX Powermatic 80 is a distinguished checkered cut dail that comes in blue, silver, and black, this is accented with polished steel or rose gold bezel, hour and minute hands, and hour markers, depending on the colour that fits you.

Look closer and notice the aperture, present like a beauty mark, diligently telling the date. Notice how each watch hand and hour mark is coated with Super-LumiNova for readability, even in low light.

When the Tissot PRX Powermatic 80 is not on your wrist, turn its case around, pass the knurled crown embellished with a ‘T’ and admire the movement, rotor, and jewel, in all its splendor, behind a mineral glass.

The Tissot PRX Powermatic 80 is available now for RM2,800 for the blue or black dial with steel accents, and RM2,900 for the silver dial with rose gold accents.

More Than Just A Gift: The Gift Of Time