Police are searching for the “father” and the girl’s grandmother for questioning. 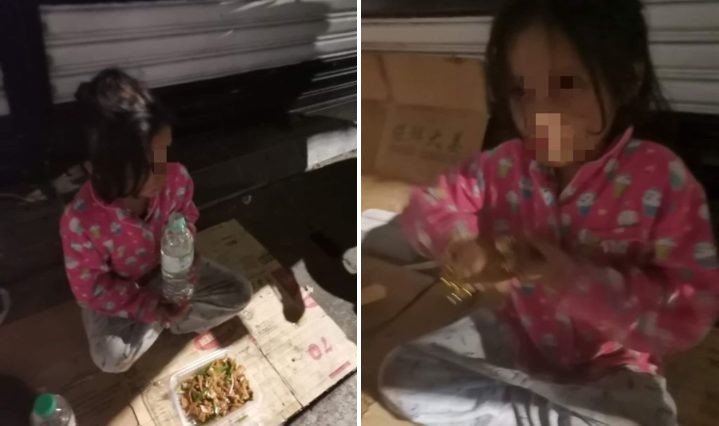 Recently the tale of a homeless 4-year old girl on the streets of KL’s Chow Kit has been floating around social media.

It’s tear-jerking how our kids are meant to be having the time of their lives, playing, laughing at everything, yet this particular girl, is allegedly being abused by her “father”.

The story took off thanks to a Facebook posting by an officer of the Welfare Department, who shared in detail what supposedly happened in her encounter with the girl and her “father”.

The girl’s “father” is said to be a drug addict, and a widower, though it is unknown how long the mother has been out of the picture.

Whether due to the pandemic, or a rough beginning, the girl is currently on the streets of Chow Kit, as a beggar with her grandmother.

The welfare officer was on location when the girl allegedly ran towards her, scared, a mess and with tears streaming down her face. The girl’s eyes were reported to be swollen and allegedly appeared bruised.

The welfare officer’s findings were quickly reported to the police. Not long after, a patrol car from Dang Wangi police headquarters arrived.

The “father” was questioned on site, while the helpless girl was said to have wrapped her arms around the welfare officer tight, allegedly saying she didn’t want to leave with her “father”.

The woman said the “father” requested RM6,000 in return for the girl.

The welfare officer said the police had asked her to care for the child for the time being, however, she was snatched away by the “father”, who then scolded her, further frightening her.

“She was forced to go with him, though it was against her will,” said the welfare officer.

The welfare officer then attempted to interview the “father”, but to no avail as he fled the scene with the young girl in haste.

According to a report by Kosmo!, Bukit Aman Sexual, Women and Child Investigations Division (D11) Principal Assistant Director Assistant Commissioner Siti Kamsiah Hassan said they had received a report on the matter on Saturday.

“The report was made by a Welfare Department officer, who received tips from the public. According to the report, the victim was roaming the streets of Chow Kit with her grandmother, begging,” Siti Kamsiah said.

Presently, the Welfare Department is investigating the case under Section 32 Children’s Act 2001, for allowing a child under one’s custody to be on the streets, or at any premises for the purpose of begging.

The police are actively searching for the girl, and her “father”.