Team Malaysia achieved many firsts and broke records at the Tokyo 2020 Paralympic. 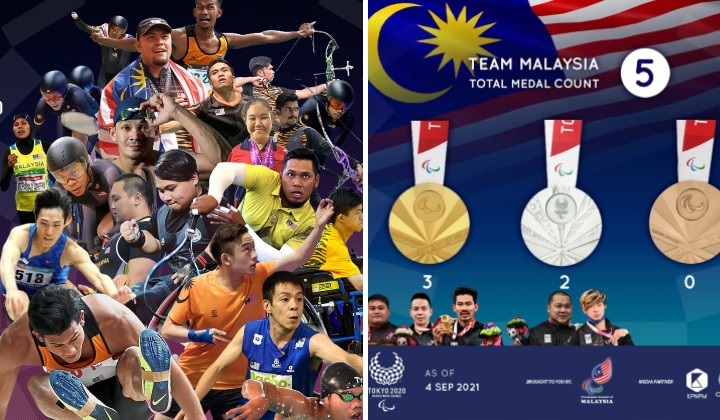 As the Tokyo 2020 Paralympic Games comes to a close today (5 September), let’s take a moment to applaud Team Malaysia for their incredible achievements, sheer determination and astounding athletic abilities.

This year saw the most amount of medals by the Malaysian Paralympians with three golds and two silvers since they first participated in the 1972 Paralympics in Heidelberg, West Germany.

On 28 August, powerlifter Bonnie Bunyau Gustin made his debut in the Men’s 72 kg Powerlifting finals and won the gold medal with the best lift at 228 kg. It was first medal for Malaysia at this year’s Paralympics.

Read More: Malaysia Wins First Medal At The Paralympics And It’s A Gold!

Malaysia’s second medal came from powerlifter Jong Yee Khie, who took Silver in the Men’s Under 107 kg finals on 30 August.

It was a triumphant return to the Paralympics for Yee Khie who previously competed in the Men’s under 97 kg in Rio and took seventh place.

Continuing the silver medal streak was Chew Wei Lun, who made Malaysian sporting history as the first athlete to win a medal in boccia at the individual BC1 event that took place on 1 September..

In another bout of firsts, it was the first time badminton was contested at the Paralympic games.

When national shuttler Cheah Liek Hou beat his arch rivalry in the Men’s Singles SU5 finals, he became the first-ever Paralympian to win gold in para-badminton.

Read More: Another Gold For Team Malaysia At the Paralympics!

Completing the three-gold target the Malaysian contingent was para-athlete Abdul Latif Romly who made a glorious return to retain his Men’s Long Jump T20 title.

Although an overall successful run of events for Team Malaysia, it was not without some drama.

On day 3 of the event, 26-year-old Muhd Nur Syaiful Zulkafli made his Paralympic debut swimming at the 200m freestyle S5 (physical disabilities) and clocked in an Asian record at 2: 56.78s.

However, an unapproved plaster on his shoulder had him disqualified.

He eventually qualified for the finals but came in 7th.

Read More: This Is Why A M’sian Paralympian Swimmer Got In Trouble Over A Plaster On His Shoulder

In another dispute over disqualifications was with Paralympian Muhammad Ziyad Zolkepli.

Ziyad who would have won gold for his record-breaking performance in the Men’s Shot Put F20 finals but was stripped at a chance over a “Call Room” violation and was late to attend the event.

Congratulations all-around to Team Malaysia for their superb effort and for instilling a sense of pride, unity and hope to your number 1 fans – Malaysians.

Another Gold For Team Malaysia At the Paralympics!

Malaysia Wins First Medal At The Paralympics And It’s A Gold!