The incident occurred at the Hospital Sultan Ismail in Johor. 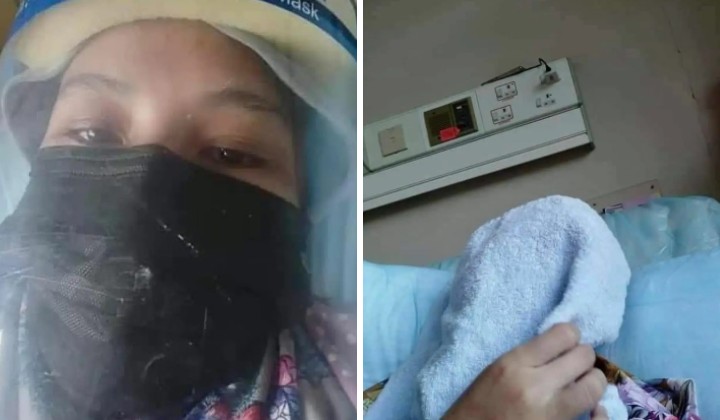 Recently, a woman’s experience going through active labour and delivering her baby alone, without the presence of doctors and nurses went viral on social media.

According to a report by Berita Harian, the incident took place at Hospital Sultan Ismail (HSI) in Johor.

The woman, identified as Noor Aziah Kassim, 35, was due to deliver her fourth baby in an isolation room in HSI as she tested positive for Covid after close contact with her husband, who was also positive.

Dr. Aman explained that she was placed in labour room 2 of HSI, with the door kept shut at all times as the room was used to house a Covid positive patient. He also said the room is quite far from the nurses station.

Dr. Aman also said the labour process happened fast, much earlier than the 6 hours she was predicted to have.

Responding to Noor Aziah’s statement that she heard the hospital staff laughing outside the labour room, Dr. Aman says it could have been from a nearby labour room, in which a vaccum labour was underway.

The 35-year old said the doctor did not allow a normal birth, indicating a surgical procedure was necessary.

Noor Aziah eventually started pushing her baby out herself, saying it took about two seconds, after which she used her legs to keep her baby from falling off the bed.

She did however mention how grateful she is that she did not require surgery in the end.

Noor Aziah claims to have called out for the hospital staff multiple times on a few different occasions, both during her labour and right after delivery, but to no avail.

After successfully delivering her baby in less than ideal circumstances, she said she mustered up all remaining energy to call for the doctors and nurses one last time, when she finally got their attention.

Noor Aziah alleged that a nurse finally opened the room door a little to peek in and called out to her colleagues; ”Hey, she’s already delivered! No wonder she was screaming just now.”

Over 120 Complaints About Workplace Bullying Lodged By Housemen And Senior Doctors, Says MMA