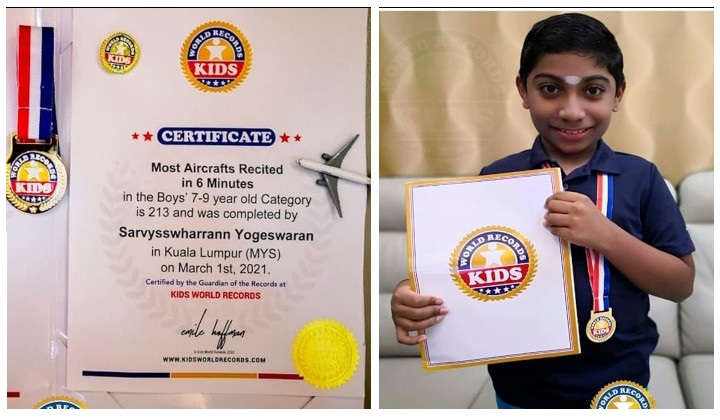 Sarvysswharrann Yogeswaran of SJK (T) Taman Melawati in Kuala Lumpur has entered Malaysia in the Kids World Records (KWR) for reciting the Most Aircrafts Recited in six minutes and 15 seconds under the boys (7-9 years old) category.

In a virtual challenge done 1 March, the 9-year-old from Wangsa Maju named 213 different types of aircraft encompassing commercial planes, helicopters and fighter jets. He received his certificate and medal 6 months later on 19 August.

His father Yogeswaran Tamil Selvan, 47,  proudly took to his Facebook to celebrate his son’s achievements.

Dream to be a pilot

Sarvysswharrann’s interest in aircraft started early with his father Yogeswaran Tamil Selvan, an aircraft engineer. Before the pandemic, he’d even follow his father on flight simulator tests.

Since young, I have been exposed to aircraft-related activities such as watching aircraft movies, viewing aircraft images, collecting models, and reading about them. Now, I love to do research on aircrafts.

Sarvysswharrann Yogeswaran via The Star, 28 August 2021

He also loves Mathematics, Science and Astronomy, which he says help him connect with aircraft-related activities.

Broke the KWR without memorisation

KWR is an online platform based in Canada that empowers children between 4 – 16 years old to “explore their interests with unbridled enthusiasm and creativity, while working toward a concrete goal”.

Sarvysswharrann tells The Star that he loves watching talent show programmes like Little Big Shots, Guinness World Records and Malaysia Book of Records which in turn inspired him to work on his personal record.

Note he did not memorise the aircraft names but instead has seen so many aircraft models in books and on the Internet that over time the names had just registered in his mind.

It is not good to memorise things because the information can fade over time.

Sarvysswharrann Yogeswaran via The Star, 28 August 2021

Sarvysswharrann said that by understanding the points and connecting them with the images, the facts will stick permanently in our minds.

So what’s next for Sarvysswharrann?

Aside from his current record-breaking feat, the talented Year Three student also happens to be a national junior squad chess player representing Malaysia at the virtual Asian School Chess Championship 2021.

He has also won three medals at the Penang International Invention and Design Competition 2021 with his innovative ideas.

As for more record-breaking attempts, his father has revealed they are getting ready to set different upcoming records with: