House rental and food alone amounts to over RM9,000 a month. 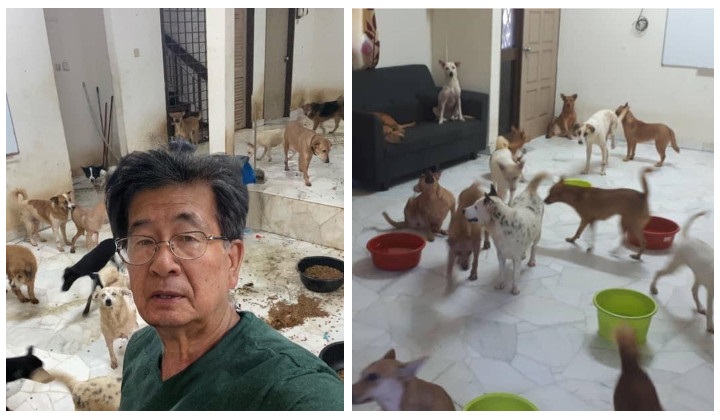 DISCLAIMER: Since this article was published, there have been allegations that the operations of the aforementioned shelter are part of an elaborate scam.

TRP will however leave the following article as-is for the purpose of reference.

The owner of a dog shelter with 50 over dogs in the Klang Valley is dying of Covid-19 and needs help to save his furkids should he pass away.

A post on the Erlang’s Dog Facebook page revealed an emotional message by the shelter’s owner with Covid-19 and since he is elderly, has a “slim chance of survival”.

Should he go, he hopes his 59 dogs, whom he lovingly refers to as his kids, will have people taking care of them.

His kids were all strays and rescued during his time as a feeder when he’d see a lot of stray dogs injured.

Hardships from the start

The shelter has been operating since 2012 with the uncle juggling two jobs to sustain all the expenses. However, with Covid-19, the description on their page says their business went bankrupt, and they could no longer pay for their dogs’ needs.

Financial struggles are one thing. But housing dogs is another and has always been an issue for the uncle and recalls many times he’s been chased away from the homes he’s lived in.

He also added that no matter how clean the dogs are, neighbours would still complain about how smelly they are.

There was even a time when someone came and took all his ‘kids’ away. Thankfully business was okay then, and he managed to bail them out.

“I ask you not to take my kids anywhere else”

Although rental for his house is RM3,200 a month, the space is big enough to accommodate his kids, and they are also safe there as the neighbours are all far away.

“If I’m gone, please take care of my kids. Each one of them is like a child and I’m determined to live because of them.”

Costs that go into maintaining the shelter

In addition to the RM3,200 house rental, other costs incurred into running the shelter go to food which is RM5,600++ a month.

Another RM1,500 goes to paying a care-taker that helps him out to ensure the place is clean, the kids are fed, and that they aren’t fighting.

The uncle doesn’t usually give his shelter’s address out because he’s afraid people will dump puppies at his place. But now, with the threat of him dying from Covid-19,  he has asked the caretaker to publish it in the event he does pass.

“At the moment, I have to pay our rent and their dog food. I’m begging for help for these two.”

If you’d like to help this uncle in saving his kids, donate to:

Since the post was first published yesterday (26 August), there has been 3.2K shares with kind netizens already making donations.

Here’s to hoping uncle will pull through this dreaded C-word.