European-themed outdoor theme park: How the highlanders were surprised and whipped up a firestorm of online protests. 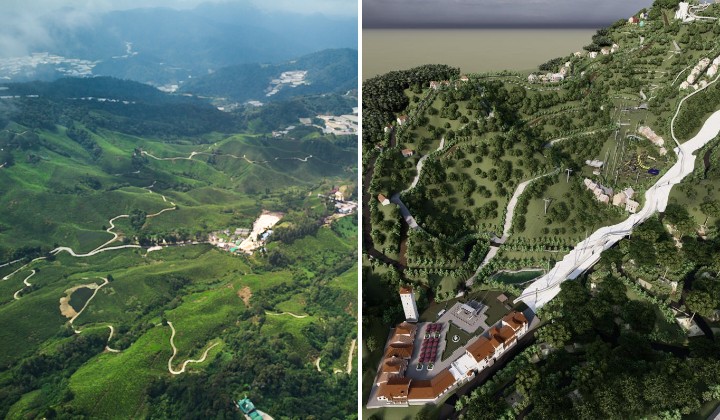 Amid the overdevelopment and the mounting problems facing farmers in Cameron Highlands are questions about how such a plan could have escaped their attention.

The theme park – Escape Cameron Highlands – came to their knowledge recently after it was announced by its developer Sim Leisure Group.

The project, touted as an environmentally sustainable theme park, will be developed in several phases. Construction is set to begin at the end of this year, with the first phase due to complete in the first half of 2023.

According to local sources, the project is said to be located at a tea plantation in Habu.

It is understood that the original owner had sold off the tea plantation – measuring some 900 acres – to Sitiawan-based Hektar Muda Assets, which partners Sim Leisure Group to develop the theme park.

Dilip Martin, president of Regional Environmental Awareness Cameron Highlands (REACH), started an online petition to protest against the project – with more than 45,000 signatures in just six days – said the Environmental Impact Assessment (EIA) report for the project is not yet submitted.

There is no EIA report…it is reasonable to think that there could be possible non-compliance of requirements. That information is important to assess the potential impact of the development; there should be accountability.

Martin said Cameron Highlands had reached the limit of  “what it’s designed to do”, with rampant overdevelopment in agriculture and tourism.

He remembers the pains after the deadly flooding in 2014, which killed several people, and hopes to prevent such an event from happening again.

He said the project is too close to the hydroelectric dam in Habu – the source of mud flood that swept through Bertam Valley that year.

Strawberry farmer Shaun Kyle Al Segar Jothi, 30, is among those who signed the petition. He was incredibly disappointed when he heard the news.

“We have a moral responsibility to reject the project. Cameron Highlands is already a pressure cooker on the verge of environmental implosion.

“I’m under no illusions that the people’s voice alone will not stop overdevelopment, but we should do all we can on our part before things become infinitely worse.”

The strong response to the online petition clearly shows how concerned people are.

“A lot more can be done to enhance Cameron Highlands as a premier ecotourism destination – adventure activities such as visits to the forest, waterfall, camping, hiking and bird watching.

“The developer should constructively engage the public and environmentalists for advice on why an alternative might be better,” he said.

The project is expected to draw some 200,000 visitors within its first year.

Locals who opposed the project are worried that it will also worsen the traffic snarl in Cameron Highlands.

Chicken butcher Ong Gee Tatt said the developer should be held responsible for an alternative to ease the notorious traffic in highlands.

“Tourists come for a few days, and then they go back, but we locals have to bear with it every day,” he said.

He hopes the project developer can show they have sufficient capacity to accommodate big groups of people regularly.

But not all are against the theme park

He points out that the land on which the theme park will be built has already been developed for a long time.

It’s not like trees will be chopped down to make way for the project. Let’s not be quick to react unfavourably at big projects in the neighbourhood.

Fertiliser supplier Tan Boon Ya said the theme park would be a force for good.

“It will encourage tourists to stay longer while creating jobs and generating income with a spin-off effect for the local economy.

“Tourists usually spend whole days at a theme park, so let’s not be too worried about the traffic,” he said.