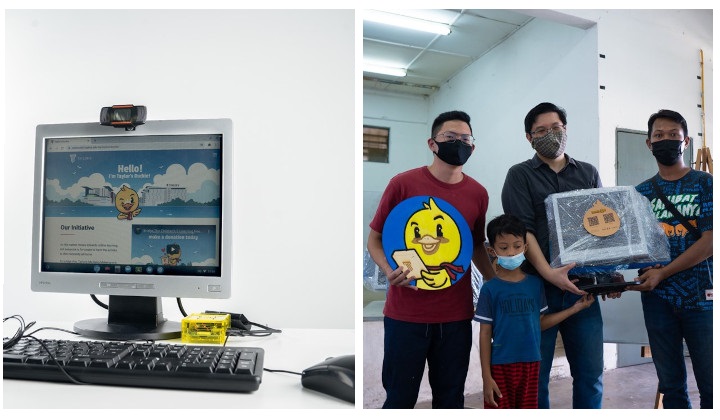 DuckiePi is a project by Taylor’s University students to address the need for a device to make online learning accessible to children from B40 communities during the pandemic.

The initiative was made possible through the university’s Taylor’sphere, an ecosystem that instils an entrepreneurial mindset that helps graduates to turn their passion projects and ideas into viable business models to positively impact the community.

DuckiePi is a device powered by the Raspberry Pi 4 Model B, a small single-board computer the size of a credit card, and has applications like Zoom, Google Suites and camera functions to access online classes and resources.

It runs the Google Chromium OS and has the following:

With these specifications the Raspberry Pi can deliver at desktop-level performance.

It is also equipped with a Raspberry Fan and Raspberry Heatsink whereby the cooling makes the package more practical for long term use.

It’s also the size of a grown person’s hand so don’t let the size fool you with what it’s capable of.

The total set-up comes to around RM400

Bernard Yap, the student behind DuckiePi’s creation, revealed at the launch of Taylor’sphere that a lot of research and negotiations were made to make the most cost-effective product without compromising quality.

It took Bernard and his team around four months to find suppliers that would help him build a total set for around RM400. This includes the computer, monitor, webcam, keyboard, and mouse too!

To raise funds and drive public participation, the team launched a donation campaign earlier this year and currently, 90 DuckiePi’s have been distributed to B40 families.

A joint collaboration of Taylor’s Me.Reka Makerspace, a collaborative learning hub in the Tayloy’sphere where DuckiePi was formed, and students from Taylor’s Makers Club, Robotics Club, and Agents of Tech, are holding a donation drive to collect a sum of RM100,000 to develop more of these devices.

They are asking organisations, NGO’s, and individuals who can afford it to contribute to those who are less fortunate by donating here.

DuckiePi have also partnered up with InstaCash on a trade-in campaign, where RM10 would be donated towards their fund upon app users trading in used devices with the promo code DUCKIE30.

For more information on DuckiePi, visit their website at https://uni.taylors.edu.my/taylors-duckie/

Students Selling PerantiSiswa Tablets Will Face Action, K-KOMM Can Block Tablets From Use