Azizul had a choice to skateboard or cycle when he was young, and you know how that turned out. 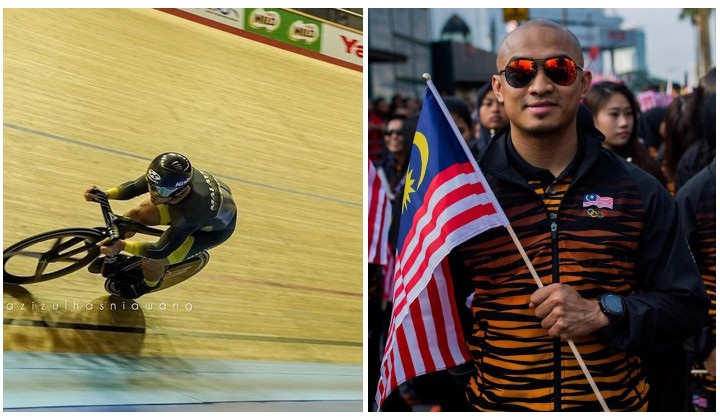 Just when we thought Malaysia would be coming home with one Olympic medal in Bronze, cyclist Azizulhasni Awang whizzed through to win a Silver for the keirin event faster than any of us could say ‘Malaysia boleh’!

But who is this man that has affectionately been nicknamed “The Pocket Rocketman”?

Azizul was born in the coastal district of Dungun in Terengganu on 5 January 1988, the eighth of nine children in his family.

The late Rozimi Omar, who was then a volunteer cycling trainer and the man who first discovered Azizul’s potential, remembers him as a “naughty village boy – but with a good heart.”

Money was tight for Azizul and his family and recalls a time when he went to his first national championship with just RM100.

We had to share whatever we had for petrol, toll, food and drinks. Plus … we didn’t have a bicycle!

When the ‘cycle’ began

Azizul had a choice to skateboard or cycle but chose the latter when Rozimi forced him to choose one.

He had always loved cycling and started riding as early as 4 years old. It was only when he turned 10 his father bought him his first bicycle as a reward for scoring 4As and 1B in the UPSR exams.

It was at 15 years old when he left for the Bukit Jalil Sports School to pursue cycling as a career, but much to his parents’ apprehension as they wanted him to become a doctor.

On his first day of school, his (then) coach told him he’d never make it due to his “small size”. He was constantly looked down upon for his stature which fuelled him to prove that size is not a limitation and he sacrificed most of his younger days to train and work hard just so he could prove those people wrong.

And prove those people wrong he did!

Azizul has competed at the Olympic Games in 2008 (Beijing), 2012 (London), Rio de Janeiro (2016) where he won a Bronze in Keirin, and this year’s Olympics in Tokyo where he won a Silver in the same sporting event.

Aside from the Olympics, he has also competed at the UCI Track Cycling World Championships several times where he won a Gold medal for Keirin in 2017 (Hong Kong).

Other notable achievements in the World Championships include:

Azizul has been married to his wife Athiah Ilyana since 30 January 2010. The couple live in Melbourne, Australia and have 2 daughters Amna Maryam and Amna Khadeeja.

He has attributed his greatest influence to his wife and family which has been obvious in interviews and on his social media.

In fact, Azizul was surprised on the day of his Olympic success with yet another piece of good news: the announcement of another child on the way!

In an interview after winning Silver at the Tokyo Olympics, the man interviewing Azizul for Astro Arena revealed news his wife is pregnant with their third child.

Clearly reeling from surprise and happiness, Azizul went down on his knees and later praised be to God for the ‘good news’.