The video was posted earlier today (11 Aug) with crowds of people not adhering to physical distancing. 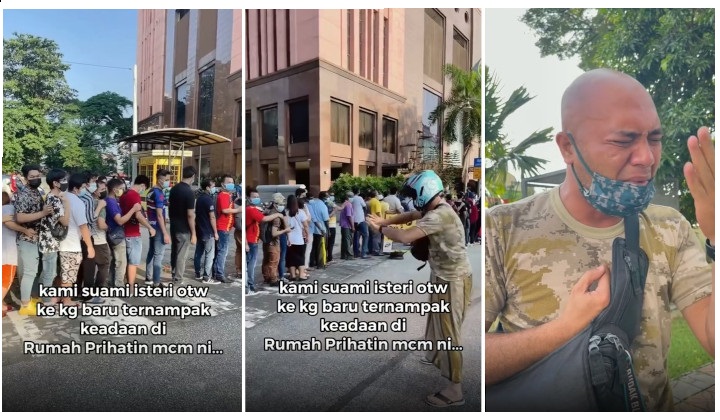 This week’s update of people not following SOPs comes in a video posted on Instagram by bondaumirahtaib.

The seven-minute video was taken outside of Rumah Prihatin@Grand Seasons, Malaysia’s first charity hotel that has opened up in Kuala Lumpur providing meals, beds, counselling services and Covid-19 vaccines to those hit hard by the pandemic.

The video features a man in a motorcycle helmet who is visibly upset at the hordes of people not adhering to physical distancing while in line to get their vaccines.

At the 1:18 mark, he makes a plea to the Minister of International Trade and Industry Datuk Seri Mohamed Azmi Ali and says “Azmin Ali, you do something brother!”

He was then also seen urging those in charge of managing the vaccination centres (PPV) to be sensitive to the situation at the location, which happens to be located on the same road as Hospital Kuala Lumpur (HKL).

The man was also seen trying to rectify the situation by instructing those in line to distance themselves from each other.

Later in the video, the man is seen visibly shaken and in tears at the situation that just happened.

“Why are people with power not good at using power at a time like this. Many people have died. People’s fathers and mothers! Use that power properly,” he says in his rant.

There was nothing short of an outpour of support from Netizens with one thanking him for speaking up for the rest of us.

The video has over 1.5 million views after it was first posted around noon today (11 August).