The Islamic Hijrah calendar was set to begin with the Prophet Muhammad’s migration from Mekkah to Madina. 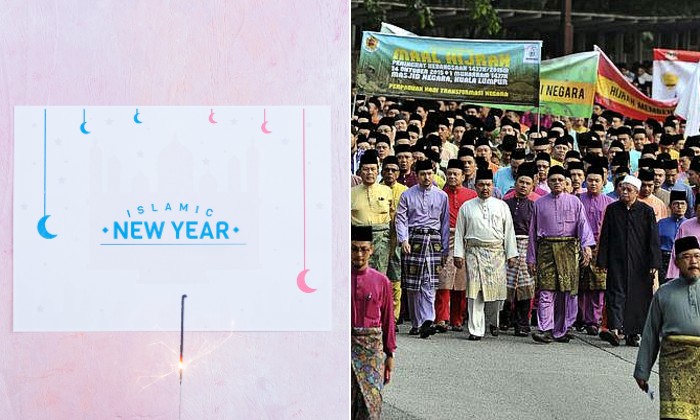 As the sun sets on 9 August 2021, Muslims in Malaysia will be celebrating ‘Maal Hijrah’ or the beginning of the Islamic New Year.

Also referred to as ‘Awal Muharram’, it marks the first day of the month of Muharram and is observed in many parts of the world as a public holiday including places like the United Arab Emirates (UAE) and here as a national holiday.

This Awal Muharram will officially be the 1443rd year since the Islamic calendar began when the Prophet Muhammad S.A.W and his followers historically ‘Hijrah’ or migrated from Mekkah to Madina in Saudi Arabia back in the year 639 CE.

As it’s often called, the Islamic Hijrah calendar is a lunar-based calendar that is observed according to the phases of the moon and consists of 12 months between 29 to 30 days long, making up to a total of between 354 and 355 days in a year.

This sets it apart from our modern solar-based Gregorian calendar which consists of between 365 to 366 days in a year.

Read More: Guess What? There Will Be TWO Ramadans In The Year 2030

The Hijrah calendar was created several years after the Prophet’s passing by the second Muslim Caliph, Khalifa Umar Ibn Al-Khattab, to synchronize and standardise dates accross the empire.

It is chronicled that Umar was frustrated by the multiple and conflicting dating systems that were used during his time and agreed with other Muslim leaders to establish a unifying Islamic calendar system to sort things out.

After careful deliberation, it was decided that the date of the Prophet’s migration would be set as the start of the Hijrah calendar, an event that had lead to the foundation of the first Muslim state.

In the West, the Hijrah calendar is also referred to by its abbreviation, AH, which is Latin for “Anno Hegirae” or “in the year of the Hijrah”.

Here in Malaysia, Awal Muharram was gazetted and celebrated as one of the 12 official national public holidays beginning 1995 according to the Holiday Act 1951 (Act 369), and prior to the pandemic, we regularly held public events and parades to commemorate the day.

Fun fact, according to Islam, the ‘day’ itself begins at sunset, not the sunrise and in most Muslim majority countries, Fridays and Saturdays are considered weekends while Sunday marks the first day of the week much like how they do it in Kelantan, Terengganu and Johor.

The Arabic pronunciation for the days of the week is also the inspiration behind what we here in Malaysia name ours. See if you can spot the similarities;

Source: Dr Noor Hisham dinobat Tokoh Maal Hijrah 2020 Fahami sejarah, maksud hijrah Islamic calendar Months and important days The Story Behind the Islamic Calendar BC and AD, BCE and CE: What’s the Difference? THE ISLAMIC CALENDAR The Hejira, or Islamic Calendar HOLIDAYS ACT 1951 How and Why did the Hijiri Calendar Begin? Perayaan dan Festival What Does The Moon Have To Do With When & How Long We Get To Celebrate Hari Raya? Guess What? There Will Be TWO Ramadans In The Year 2030 The Forgotten History Of Malaysia’s 6 Timezone Changes
Tags
awal muharram holiday islamic calendar islamic new year maal hijrah Malaysia Muslim public holiday