Her career as a diver spans over 20 years. 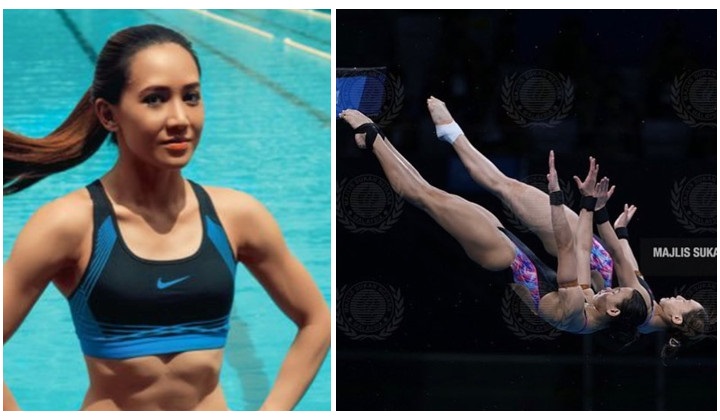 Leong Mun Yee, also known as Angela, is a household name in the Malaysian athletic world for not only winning Malaysia multiple medals across various global championships, she’s also the first Malaysian athlete of either gender and sport to compete at five Olympic Games – the crème of the crop for sports.

Although Mun Yee, along with her diving partner Pandelela Rinong, came in 8th at the finals for the Women’s Synchronised 10 Platform Diving Finals at the 2020 Tokyo Olympics, she famously said “no regrets” having tried their best.

READ MORE: Malaysia In Olympics: No Medal This Time For Women’s Synchronised Diving

Shortly after her final dive, the 36-year-old announced her retirement after having represented the national team and first putting Malaysia on the world diving map 23 years ago.

Born and bred in Ipoh, Mun Yee attended the Marian Convent Primary Girls School there before moving to the Bukit Jalil Sports School in Kuala Lumpur when she was 11.

Albeit famously known as a diver, Mun Yee started as a swimmer and it wasn’t till her parents brought her to diving try-outs at the age of 10 that she got the passion for diving.

Three years later at the ripe age of 13, she made her debut at the 1998 Commonwealth Games in Kuala Lumpur.

The rest you could say is herstory.

Super athlete with a degree in communications

Amid the hustle of life as a professional diver, Mun Yee also enrolled herself at University Putra Malaysia (UPM) in 2007 where she finally graduated 10 years later in 2017 with a Bachelor’s Degree in Communications.

As a national athlete, it’s not easy to juggle our studies as we are often away in training camps and competitions overseas. But education is very important for me and I was determined to finish my studies — no matter how long.

Aside from the Olympics, she’s been invited to compete and has won medals for the following renowned championships:

What the future holds

With brains, brawn, beauty, and a whole lot of grit, the future is still bright for Mun Yee.

Despite not fulfilling her ambition to bring home a medal at her final Olympics, a recent article by the News Straits Times states Mun Yee is planning to set up an academy to develop up-and-coming divers. She says:

I want to contribute in a different way as I will not be diving anymore. I still have passion for the sport. I want to unearth and develop divers with talent for the country.

In another article by the New Straits Times from August 2020, Mun Yee plans to finish her Masters in Mass Communications after she retires – a pursuit she began in 2019 but when the Olympics was pushed back a year, she had to postpone her studies to prioritise her Olympic preparation.

In the same article, Mun Yee was also looking to dabble in breakdancing and has been getting the steps in her footwork in her spare time during the Movement Control Order last year.

This comes at a time where breakdance is considered a sport that is set to debut at the 2024 Paris Games.

Whatever it is Mun Yee decides on doing, Malaysia is behind you 110%.

Congratulations on your decades-long success and for putting Malaysia on the world diving map!