An online petition to allow Malaysians in Singapore to return home without quarantine has garnered over 10,000 signatures. 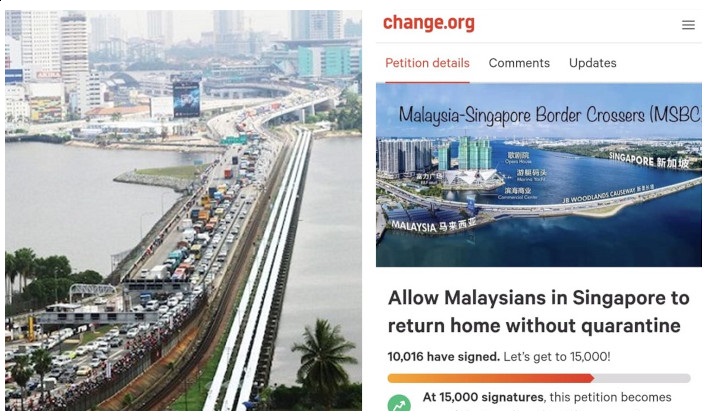 Are you a Malaysian living in Singapore, or have a loved one in Singapore that’s desperately trying to get back into Malaysia?

A recent online petition that has been circulating, calls for Malaysians in Singapore to be allowed to return home without quarantine and has garnered over 10,000 signatures at the time of writing.

One man, one mission

The person behind the hopeful petition is Danny Tay.

Danny, known as Dan Ny on Facebook, took to the group Malaysia-Singapore Border Crossers (MSBC) on 5 July to share an e-mail he sent to Malaysia’s Ministry of Health (KKM) and the National Security Council (MKN).

In his e-mail, he explained he is a Malaysian working in Singapore and like many other Malaysians, has not returned to Malaysia to see family for over a year.

Danny also said that most Malaysians in Singapore have been fully dosed and suggested KKM and MKN allow fully-vaccinated Malaysians returning to only do a one day quarantine, as opposed to the 14 days while waiting for their polymerase chain reaction (PCR) test results.

After sharing a screen capture of his e-mail to the group, he then created a petition on Change.org.

A day later, Danny received a response from MKN that his e-mail had been received followed by a standard reply stating the current rules and regulations.

At least ada reply. Don’t give up. Let’s all of us do our part. Keep on Pushing them.

Although the response wasn’t the one he was hoping for, his efforts have not gone to waste and has gained traction from media on both sides of the Causeway.

“Expensive, time-consuming and not fair”

Danny told The Straits Times, “This is very stressful and to ask Malaysians who have lost their jobs for money to pay for their 14-day quarantine in a hotel in Johor Baru is really not fair.”

Malaysians returning to Malaysia from abroad are required to pay RM1,050 for the mandatory 14-day quarantine at a designated centre.

Those who plan to go back and work in Singapore will have to pay another $2,000 (RM6,200) for a 14-day stay at a dedicated facility there, which adds up to more than RM8,000 to quarantine in Malaysia and then again in Singapore.

Not only is quarantining expensive but time-consuming with a total of 28 days spent cooped up and isolated in a confined space.

Singapore To Allow Travellers From Malaysia With More Relaxed Restrictions