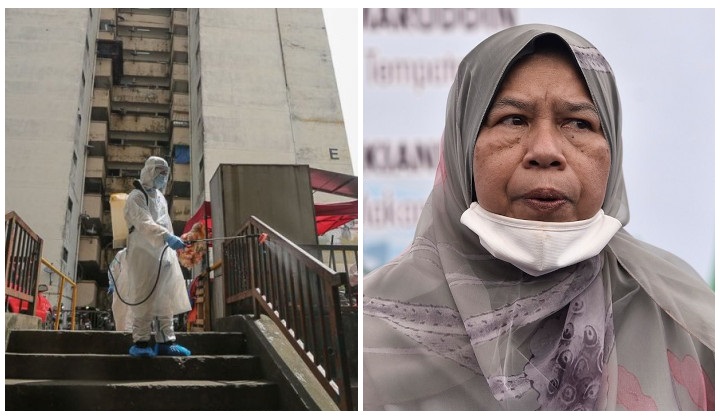 Zuraida also admits the process is ‘cheap’ and in an interview with Malaysiakini said:

The cost is minimal because we received 1,000 litres of chemicals a long time ago, sponsored by a medical company. We still have some left with us because we mixed it with water, we don’t use much.

In the same interview, she also indirectly answered “yes” when asked if she was convinced that the cleaning agent used by her ministry worked on the Covid-19 virus.

What the experts are saying

Infectious disease expert Prof Dr Adeeba Kamarulzaman criticized the nationwide sanitation exercise, which launched on 30 May, saying the large-scale two-day disinfection exercise at 284 locations nationwide was not based on the latest scientific findings and is a waste of resources if not done in a targeted manner.

Top scientists have supported her statement with the Academy of Medicine of Malaysia (AMM) saying the Health Ministry should update its “Garis Panduan Pembersihan dan Disinfeksi di Tempat Awam” guidelines.

Here are what other established international institutions are saying concering large-scale spraying of sanitisation chemicals.

WHO has said public disinfections pose a hazard as the chemicals used, such as formaldehyde, chlorine-based agents or quaternary ammonium are not recommended due to its adverse health effects.

CDC notes that spraying cleaning products or disinfectants in outdoor areas such as sidewalks, roads, or groundcover is NOT necessary, effective, or recommended.

Like the CDC’s recommendation, HSE also believes large-scale spraying or disinfecting in outdoor spaces such as streets or open marketplaces is not recommended for Covid-19 or other pathogens. Why? Because there is no controlled dispersion of the chemical hazards and can also unintentionally expose the chemicals to people.

Streets and pavements are not considered routes of infection for Covid-19 and spraying disinfectants, even outdoors, can be dangerous to people’s health and cause eye, respiratory or skin irritation or damage.

The most effective way to combat Covid-19?

The best way to combat Covid-19 to protect yourself and others is to: