Getting ready for the mad rush to stay protected from Covid-19. 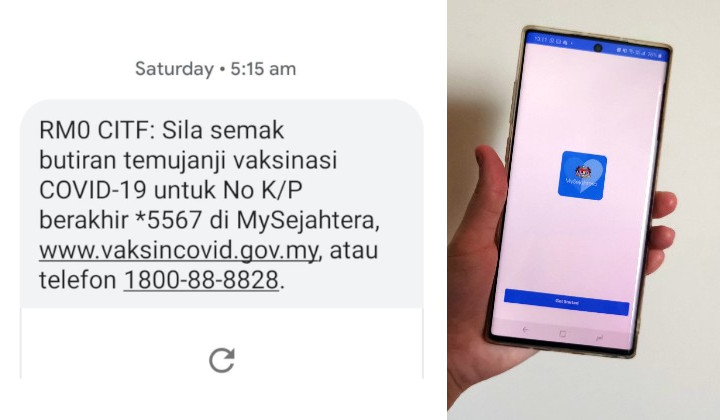 A father of three, N. Fernandez, was told by his youngest daughter that she received her appointment on the day itself.

“My youngest daughter didn’t get a vaccination date earlier.

“She woke up one morning only to find on her MySejahtera that she’s got an appointment for her first dose at 10 am the same day.

“And in Cheras,” said Fernandez, who lives in Selayang.

He told his daughter to rush there anyway, praying they will let her in.

In the end, the vaccination centre allowed her in.

For some reason or another, if you forgot to check your MySejahtera, all is not lost.

You will still be allowed in if it’s on the same day.

For many Malaysians, it has taken a long while to receive their vaccination appointment.

The wait gets more frustrating as daily Covid cases continue to rise.

So, they have no choice but to tolerate receiving vaccine appointments at the last-minute.

Experiencing the surreal feeling of finally getting the vaccination appointment makes up for it.

“They didn’t think much; they just go for it.

“Of course, living in a small city, it’s much easier to rush to the vaccination centre (PPV),” said Lee, who lives in Kuantan.

Nutritionist Arison Ho Sel Chuan said his friend almost missed it despite checking the MySejahtera app every day in the morning.

One day, he got his appointment through MySejahtera at 1 pm.

The appointment was at noon.

“It was a bit chaotic; there were no messages no whatsoever.

“Luckily, he was working from home, and his time was flexible,” said Ho from Puchong.

The last-minute notification, which comes even at 5 am, could be due to absentees.

Many Malaysians had registered for the immunisation programme but did not show up for their appointments.

Regrettably, the MySejahtera app, part of the National Covid-19 Immunisation Programme costing RM70mil, has no push notifications for vaccine appointments.

Push notification can considerably reduce the chances of people missing their vaccination appointment.

And so, users had no choice but to check their app regularly to avoid missing out on the all-important appointment.

Barbs had been thrown at the MySejahtera app for its inadequacies.

The criticisms include alleged ‘back door’ vaccine agents manipulating loopholes in MySejahtera to secure vaccination appointments.

It is claimed that the agents charged as much as RM300 to secure an appointment slot.

In response, the Science, Technology and Innovation Ministry said MySejahtera is secured with two-factor authentication, including a timestamp and a personal identification, to prevent abuse.

The app also comes with a push notification that must be turned on manually in the app’s setting menu.

Science, Innovation and Technology Minister Khairy Jamaluddin had also called on the public to be patient.

He said vaccine appointments are assigned based on the user’s first registration on the MySejahtera app.