The competitive sport of cup stacking has taken speed and hand-eye coordination to another level. 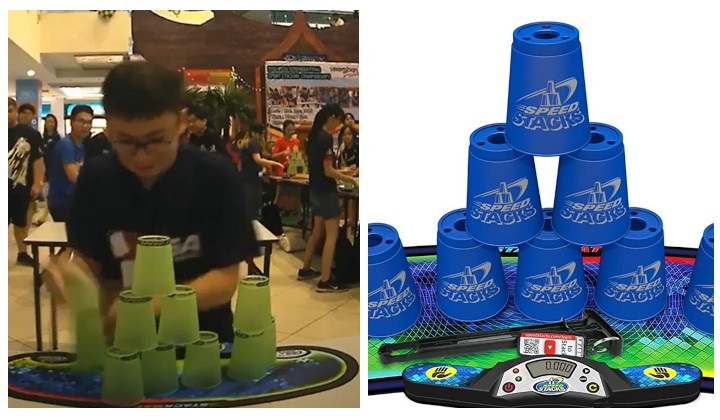 Everyone has a story about how they got to know about sport stacking.

For me, it was watching the Netflix documentary The Speed Cubers about speedcubing, a sport involving solving a variety of combination puzzles, the most famous being the 3x3x3 puzzle or Rubik’s Cube.

Although speedcubing and sport stacking are two entirely different sports, they both require speed and a certain level of ambidexterity to pattern solving.

The process of assembling cups in different formations and then disassemble them as quickly as possible is essentially what sport stacking is.

If watching someone sport stacking gives you a rush, imagine what it’s like for those doing the stacking.

Sport stacking started in 1981 when Wayne Godinet of the Boys & Girls Club of America in California came up with the idea after the children he worked with were bored of playing traditional sports.

He gave them paper cups and asked them to stack the cups in a pyramid, run and touch a wall, come back and stack them again as fast they could.

The activity was so well received that Godinet acquired plastic cups for his club to play with but discovered the cups would stick together so he modified them by adding a hole to the bottom of each cup.

“Not athletically inclined with low self-esteem”

Godinet told the New York Times that he turned the game into a sport because he recognised that children who were small or not athletically inclined had low self-esteem.

Healthy competition may improve self-esteem in children and is something they do not have to be ‘athletic’ for per se. The ability to cooperate itself builds the confidence to work in a team, which then leads to better self-esteem.

Godinet hosted the annual National Cupstacking Championship in which one of the champions by the name of Matt Adame, appeared with his team on the popular Tonight Show Starring Johnny Carson.

The attention caught the eye of physical education teacher Bob Fox who, together with Larry Goers, created a line of proprietary sport stacking products.

In a study by Brian Udermann of the University of Wisconsin-Lacrosse in the US, sport stacking improves hand-eye coordination and reaction time by up to 30%.

For example, a student develops a greater percentage of the right side of the brain which houses awareness, focus, creativity, and rhythm.

Learning to stack helps train the brain for sports and other activities where the use of both hands is important, like playing an instrument, video game or using the computer.

Elements of sport stacking like sequencing and recognising patterns, can also help with reading and math skills.

Aside from being a workout for your brain, sport stacking is also a competitive sport that promotes self-confidence, teamwork and competition which makes it popular among children, but any age group can participate.

Competitions are divided into 14 different age divisions ranging from 6-years and under to seniors 65-years and up. There are divisions for disabled competitors too called “Special Stackers”.

The three main sequences in official sport stacking events as per the WSSA are:

Stackers can choose to compete in the Individual Timed Competition under one of the above sequences based on their age division.

There is also the Doubles Timed Competition which involves a team of two stackers working together to complete the Cycle stack as fast as they can with one stacker using their right hand and the other their left.

The Head-to-Head Relay Competition consists of two teams of at least four stackers each, but no more than five, in the correct age division for a relay match to complete a series of sequences first.

And finally, there is the Timed 3-6-3 Relay which is basically a combination of Head-to-Head Relay and Individual Timed competition but instead of competing with another team, you are competing against the clock.

An important thing to note about competition is the protocol for the setting of world records and they include:

The top-rated sport stackers in the world are Malaysian!

Malaysian’s may be top performers in eSports, another sport that requires brain dexterity, but did you know one of the top players in the WORLD for sport stacking is Malaysian?

This is Chan Keng Ian, current record holder in the World Overall Records for the Individuals category in the 3-6-3 and Cycle event.

Along with Wong Jun Xian, Keng Ian is also the record holder in the World Overall Records for the Doubles category Cycle event in 2019.