The youth today are our leaders for tomorrow and the time to pave the way is now. 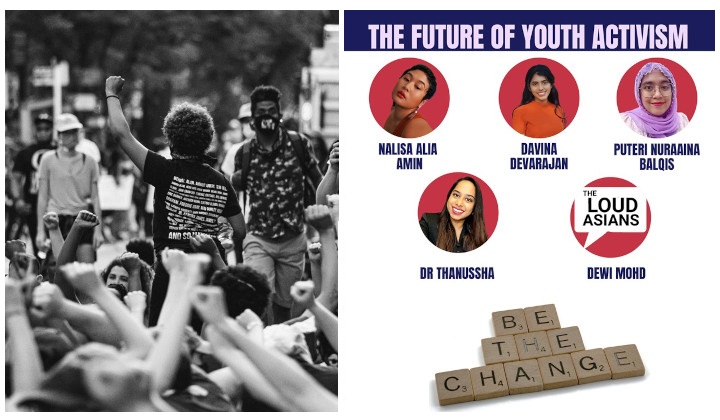 A group of young women gathered in a virtual room one Friday night, not to talk about stereotypical “girl things” but to talk about important things in general like activism, more specifically- youth activism.

The forum, titled The Future of Youth Activism, was hosted by the All Women’s Action Society (AWAM) and featured five different youth activists of varying backgrounds but all with something important to say.

While all the ladies had something to say, the general consensus as to why youth activism is so important in these times is the underrepresentation of young people in parliament for example.

Parliament, with its primary function to make laws and represent the country’s voters and citizens, is so important that the youth should be well represented.

Dr. Thanussha brought up the fact less than 1% of the people in parliament is under 30, while Nalisa feels there should be a time limit to be a politician.

Davina brought up a good point on the lack of representation and felt that youths shouldn’t be lumped into one group, but instead to consider their gender, where they live geographically, and their culture as their narratives will be different, and it brings up a perspective we need to make better policies.

Puteri brought up the kitajaga.co app, a revolutionary platform that’s run by young people who have what it takes to keep the spark alive by channelling their energy and skillset to stir changes that it becomes a national scale movement. She adds that this vigour is the tip of the iceberg for youths to lead the nation.

Metaphorically speaking, with the lack of youth representation, it’s like we’re living in Jurassic (park) times because there are so many dinosaurs.

And you know what happened to the dinosaurs…

To put into context and to wrap the important question of why youth activism is so important to the panel, Dewi of the Loud Asians said:

“It is highly important for youths to be leaders because without them there is no future because after the dinosaurs are gone and there are no leaders to take over, then who else is going to run the country?”

Gaps in the system

To fill in the gaps that are prevalent in every sector, Muda is taking conversations beyond the virtual space to on the ground for first-hand data to formulate from.

Other ways to fill the gaps stem from education and giving the youth room to reform by practising mock elections at school for example. Doing so will introduce young people to the concept of elections to understand how democracy works, the role of government and parliament.

This idea of thinking also gives students more autonomy to think for themselves and that kind of empowerment is advantageous at all levels of society.

A lot to talk about, not enough time

The hour and a half long forum allowed the panel to discuss several things, all valid and pertinent to the embodiment of youth activism.

From how social media is an excellent tool to how going on the ground to reach rural youths is just as important.

Education whether in schools or within ourselves, is also crucial in a bid for a better future.

Look at Ain Husniza for example, the 17-year-old who is advocating the #MakeSchoolASaferPlace campaign and even brought the plight to light on a global level. It was self-education and the courage that public speaking taught her that made her speak up to know that rape is nothing to joke about.

In this day and age where many (older) adults may be feeling despair, it is the youth that has taken on the challenge by speaking up on behalf of future generations.

Whatever the cause, youth activists can all agree on one thing: the desire for a better society because actions speak louder than words.

Enlighten yourself and watch the full discussion here.

If you or someone you know would like to foray into activism, primarily political activism, AWAM is organising a free Stepping Into Power workshop which you can register for here.

The workshop aims to increase gender sensitisation of political party members and is open to all genders. The first session starts this weekend (17 & 18 July) and if you miss that, another one will be held on 24 and 25 July.