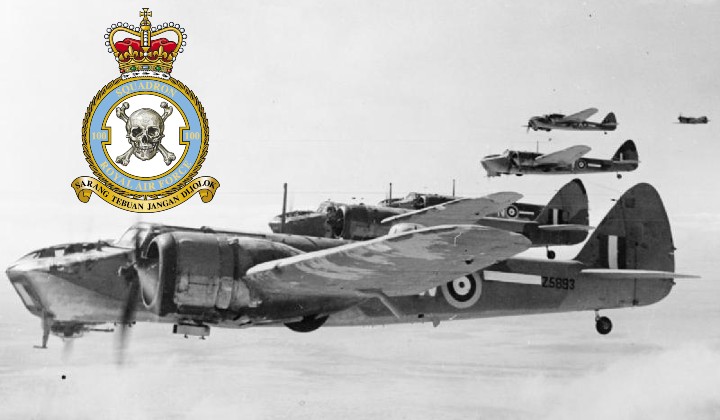 “Sarang Tebuan Jangan Dijolok,” was the official motto used by the No.100 Squadron of the British Royal Air Force (RAF) as they were buzzing over the skies of old Malaya and Singapore from the 1930s till the 1950s.

Translated it means “never stir up a hornet’s nest”, the Malay proverb was engraved onto the 100 Squadron’s official crest as they flew bombing and reconnaissance missions across Southeast Asia during the Second World War (WW2).

Officially formed during the height of WW1 in 1917, the 100 Squadron was established as a night bombing unit that flew over the Western Front of Europe. The squad also later took part in the Irish War of Independence in 1920 and provided close air support to soldiers on the front lines.

In 1933 the 100 Squadron was re-designated as a torpedo-bombing unit – assigned to take out enemy ships and submarines – before being deployed to Singapore in 1934 and tasked with defending the region from attacks.

A number of the squadron’s forces were also parked in Alor Setar, Kedah and were put on high alert against any incoming German naval forces as well as the Imperial Japanese Army.

100 Squadron saw its first WW2 action in 1941 when a flight crew was tasked to take air reconnaissance photographs of Japanese warships heading our way from off the coast of Vietnam. During the mission, the crew came under heavy attack and narrowly made it back to Alor Setar with Japanese planes still hot on their tail.

When Japanese troops began moving across the Peninsular after landing in Thailand and parts of northern Malaya, it became clear that the 100 Squadron and its fleet of ageing aircraft were outmatched by newer and more nimble Japanese planes.

Despite this, the squadron continued to participate in bombing missions in Kedah and Kuantan, Pahang in order to halt the Japanese advance.

As Malaya fell into Japanese hands and with the Imperial Army continuing its march to capture Singapore, the 100 Squadron was forced to retreat to Java, Indonesia, in 1942 after suffering heavy losses and nearly having its entire fleet of planes destroyed

The new RAAF squad, however, kept its legacy skull and bones badge and their Malay motto despite the emblem not officially recognised in that country.

From 1950 to 1951 a reformed version of the 100 Squadron RAF returned to our skies during the Malayan Emergency against Communist insurgents.

During that time, the 100 Squadron was tasked with flushing out enemy forces who were raiding local plantations, roads and railways, its pilots flying overhead to drop bombs or spot enemy positions for friendly forces on the ground.

The squadron also took part in escort missions and provided air support for trains travelling between Singapore and Kuala Lumpur and protected them from insurgent attacks.

It’s noted that the hot, humid and stormy weather we have here in the country made missions extremely dangerous. Despite the hazards, airmen in the 100 Squadron continued fighting and even buzzed over populated areas (mostly British managed plantations) en-route to their destinations – flying low to boost public morale.

In their six months of operation in Malaya, the squadron took part in a total of 376 missions, dropped over 2,000 tons of bombs and fired some 67,000 rounds of ammunition against the enemy.

Preceding 100 Squadron’s deployment in Malaya were the brave pilots from the No. 205 Squadron, which was credited as the first of the RAF forces to be permanently stationed in Singapore in 1929.

Immortalizing the honour, the squadron also had a Malay motto that reads “Pertama Di Malaya” or the “first in Malaya”.

In fact, there were nine RAF squadrons that were known to have inscribed the Malay language onto their badges over the course of their operations here in the region.

Leaving a permanent mark on history, the wreckage of RAF planes that were shot down during periods of conflict still remain scattered across our country today.

One such monument is the long lost crash site of a WW2 Liberator bomber aircraft located in Negeri Sembilan which had only been recently discovered in 2006.

It’s estimated that there are some 500 wreckages of WW2 planes belonging to the British, Australian and American militaries that can be found throughout Malaysia.