From the experience to health advisory and traditional remedies. 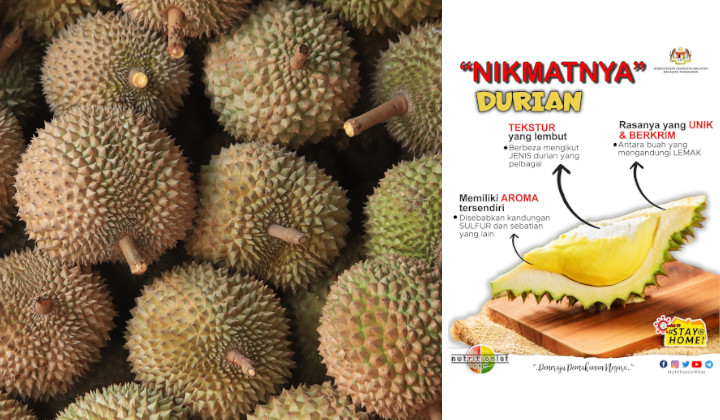 There is usually a shed in a clearing in the middle of a durian orchard. It’s a simple raised platform to keep it off of the ground, with a roof to provide shade. If you’re lucky, there will be some rambutan trees. If you’re unlucky, there will also be some fire ants.

The rambutan tree will bear clumps of fruits, ready for picking when durian season is approaching. Most are red, some are yellow, a snack while waiting for the fickle durian. Its wood and leaves would be burned to make smoke, to chase away the insects.

For those in the know, there would also be mangosteen somewhere. This purple-skinned fruit is often eaten with durian back in the day because they go well together, and the mangosteen is said to counter the “heatiness” of the durian.

A novice would get excited as the noon breeze picks up speed. From up high came a sudden sound, like splashes of leaves, that ended as abruptly as it began, with a thud.

Sometimes it’s just the one, sometimes it’s more, but it is almost always too few. As the breeze turns into a gust, it is up to the experienced to hold back the novice’s compounding excitement. Rushing for the durian fruit before winds calm down and the fruits have stopped dropping would mean certain injury.

The durian trees grew tall. It takes at least 5 years before they bear fruit. The large multi-kilogram fruits are laden with thorns and could drop from its branch without warning, onto an unsuspecting victim.

Sorting it all out

After the fruits are safely collected, they will need to be sorted. The ones that broke open had to be consumed first, or be made into tempoyak (fermented durian).

They would also know that those with holes in them, made by squirrels or monkeys, are the best ones. The animals always knew how to pick the fruits better than us.

Even after all that, the durian would still put up a fight. Opening one takes skill, a bit of know-how, the right tool, and of course, experience.

Now durian is in everything from ice cream to pizza. It can be found almost all year round, plentiful, and ready to be consumed.

Advice from the Ministry of Health

Since it is the durian season, the Nutrition Department of the Ministry of Health put out an advisory for all durian lovers in the form of 5 tips to make your durian eating experience better.

The ministry also noted that the side effects of durian such as feeling heaty, headaches, and gassiness, are not prevalent and are not something that is experienced by everyone.

While the nutrition value of a durian differs from fruit to fruit and piece to piece, it is still considered nutritious.

A durian contains no cholesterol, a lot of energy, full of dietary fibre, and is a source of vitamin C. At the same time, it is high in fat and carbohydrates.

While the side effects of the durian do not affect everyone, it has been a problem that durian lovers have faced ever since one of these fruits fell from the sky and almost killed them.

Remedies are plenty and they address two main problems: heatiness, and the smell which comes from sulfur in the fruit.

Some pair the fruit with mangosteen, one of the most common practices is to drink water from the durian shell.

However, the most hard-core of the durian eaters would take the white membranes from inside the durian, put them in a bottle, and fill it up with water. They will then drink plenty of this water, refilling it after each durian session.

Finally, a pro tip that both health professionals and veteran durian aficionados would agree: never have durian with alcohol.

Bonus Tip: To get rid of the durian smell from their hands, some folks wash their hands using a durian seed. It works just like stainless steel soap. It binds with the sulfur that gives the fruit its smell and washes it away.