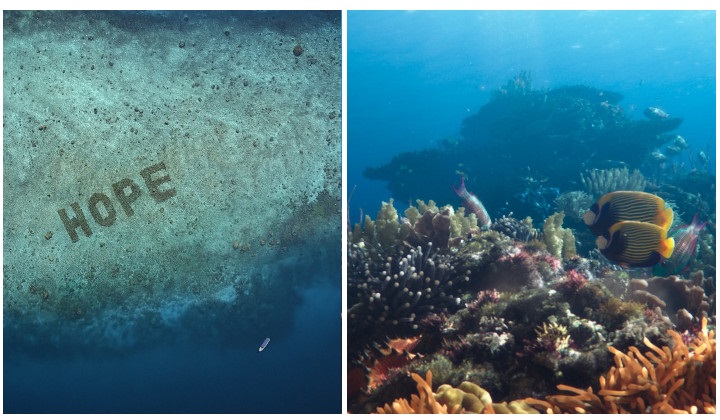 Scientists estimate that if the world does nothing, 90% of the world’s tropical reefs will be gone by 2043, impacting nearly 500 million people who depend on them for food, income and coastal protection.

Thanks to pet food brand Sheba by Mars Incorporated, along with the help of governments, universities, businesses and NGOs, Hope Reef was created in 2019 in response to the loss of reefs worldwide.

It is the world’s largest coral reef restoration program off the coast of Sulawesi, Indonesia and sits on the Salisi’ Besar reef platform near the island of Bontosua.

The reef is built to spell the word ‘HOPE’, hence why there is literally hope.

It’s even visible on Google Earth and Maps:

Forward-thinking technology to the rescue

The Hope Reef project uses handmade reef star structures known as the Mars Assisted Reef Restoration System (MARRS) which are locally sourced and handmade by the local people of Bontosua.

You can do your part too and it’s as easy as watching a video on YouTube. No joke!

All you have to do is watch The Film That Grows Coral, a short 1-minute 38-second video of stunning under-the-sea visuals and learn about how coral reefs face extinction and the importance it is for not only marine life but our lives as well.

Every view of the video helps to raise money for reef restoration through Sheba’s campaign partners, The Nature Conservancy – a global conservation organisation dedicated to conserving the lands and waters for a world where people and nature can thrive.

By the end of 2029, Sheba and its parent company Mars Incorporated, hope to restore more than 185,000 square meters of coral reef around the world, which is roughly the size of 148 Olympic swimming pools.

We are delighted to report that since the Hope Reef project started, coral cover around the island of Bontosua has increased from 5% to 55%. Fish abundance has increased by 300%. Other species, such as sharks and turtles, are also returning.”

Do your part in reef restoration and watch the video so that we have more coral today and more fish tomorrow.