The order was made through a food delivery platform from an eatery in Bangsar. 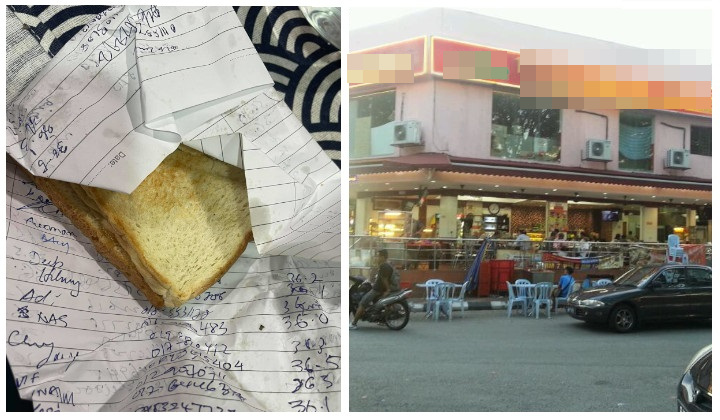 Facebook user Jasonino Wong took to his social media recently to post about his online order of roti bakar (toasted bread) that arrived wrapped in what appears to be the restaurant’s SOP sign in sheet.

Jasonino described the incident as ‘unhygienic’ and ‘stupid’ as it not only compromises hygiene by being wrapped in paper that hundreds of people could have contaminated, but it also exposes the names and phone numbers of those people.

He tagged the alleged eatery and asked, ‘what’s your excuse?’.

He also tagged the Food Safety and Quality Division under the Ministry of Health (BKKMHQ) to take firm action against the restaurant, and the Malaysian Communications and Multimedia Commission (MCMC) to look into whether the restaurant is violating Malaysia’s Personal Data Protection Act (PDPA).

At the time of writing, no response has been made from any of the parties tagged by Jasonino (weekend lah!) but the delivery platform in which he ordered through did refund him the amount and have launched an investigation into the issue.

If the restaurant in question is found responsible, under Section 15 of the Food Act 1983: Labelling, etc., not complying with standard of food:

Where a standard has been prescribed for any food, any person who prepares, packages, labels or advertises any food which does not comply with that standard, in such a manner that it is likely to be mistaken for food of the prescribed standard, commits an offence and is liable on conviction to imprisonment for a term not exceeding three years or to fine or to both.

If found liable under the Personal Data Protection Act 2010 (“PDPA”), the penalty for non-compliance is between RM100k to 500k and/or between 1 to 3 years imprisonment.