Malaysian fighters are itching for a fight but there are currently no matches to be found because of the pandemic. 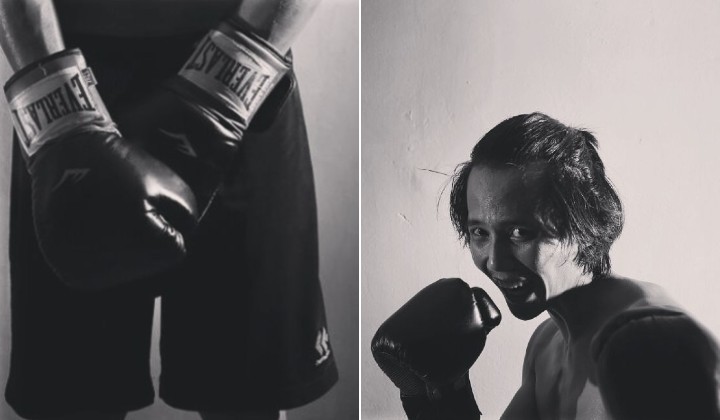 “The path is always set. If you wish for it, you just have to go through it,” said 29-year-old Muhammad Harithah Darus, a man that I personally picture to be the embodiment of waking up every day, and choosing violence. But in a healthy and constructive way.

Like most people, Hares, as his friends call him, spends his day hustling away to make a living, working as part of a production team tasked with shooting, editing and directing videos and programs for the masses.

But outside the studio, this family-man who’s built a home in Klang, Selangor holds bigger ambitions of becoming a champion in the professional world of martial arts.

“I feel like I was born and bred with it. Melaka people are rough,” he chuckled, explaining that his rugged upbringing in the historic state to be the influence behind his chosen dream of becoming a martial artist. Growing up in a family of seven siblings, Hares says that he had always been used to having to get a little physical to get things done.

Hares also revealed that he had grown up in an environment where the people he knew and respected were involved in gang-related activities, and had himself witnessed random street fights at a young age. This part of his life, he said, further drove him to search for positive outlets to channel what life had put in front of him.

I still know people who are involved (in gangsterism). They wanted to do other things in life but did not have the platforms.

Learning to be inspired by his father instead and with a supportive mother who was okay with him getting a few punches, as long as he didn’t get his face smashed in, Hares started developing an interest in Silat during his time in secondary school and began competing in some teenage-angst filled matches.

He explained that in the brashness of his youth he had only concerned himself with the more physical aspects of fighting, rather than taking time with the more aesthetic elements of the traditional forms of martial arts.

In my mind I always want to feel what a real fight is like, getting physical. So I broke away from what’s traditional.

Hares says that fighting is something that brings him exhilaration and tremendous satisfaction, regardless if he wins or loses – sharing his personal philosophy that fighting can mirror an individual’s journey through life.

It’s always you in control. It’s honest and everything is fair game. You have to walk the talk, which most people don’t.

After taking a short fighting hiatus during his university days, Hares said that his itch for action came back when he was helping coach his brothers who were also competing in close contact sports.

Starting his fighting career almost from scratch, Hares said that he first taught himself how to box and kickbox by watching videos on YouTube. From there, he jumped straight into the ring and began competing in amateur matches, refining his skills along the way.

“I had no master after school, I learned everything on my own first, later I got to know people who knew about competitions and I just went,” he said, telling how he slowly became acquainted with the sport and the people within Malaysia’s fighting community, who he said were very welcoming and supportive.

Hares even had the chance to bond with Sabah born MMA fighter, Eddey ‘The Clown’ Kalai, who became a great help in his fighting journey.

“He’s an OG in the boxing scene and he lets me train at their gym for free, helping me in my corner in local fights,” shared Hares explaining that although he truly never had an actual team at his back, the community was always there to show him support and teach him all the lessons he needed to know.

One person who is always in Hares’ corner is his wife, Nurdalila Allias, who is by his side during every single one of his matches – from the time he competed in boxing events hosted by the World Boxing Council (WBC) to taking a bus trip together all the way to Singapore for kickboxing matches with the Singapore Fighting Championship.

Currently, Hares stands in the rankings as a Semi-professional fighter in the sport of boxing and kickboxing besides also jumping into the ring of Mix Martial Arts (MMA) fighting.

As a Semi-pro athlete, it can be said that he lives life moving from one fight to the next, contending with some of the best fighters in the region and in constant search for experience, glory and of course the cash to get by.

While he does not intend to fight past the age of 40, he does have ambitions of winning a championship title one day. However, Hares says that compared to our regional neighbours like Singapore, Indonesia and Thailand, Malaysia’s fighting scene isn’t well developed enough to support a full-time career in the sport.

We definitely need more competitions around and there is a lack of exposure. Malaysia’s fighting scene is quiet and there’s no money in fighting. Malaysia also has a huge talent pool but everything is restrictive, there are no platforms for new kids to enter.

Hares also said that since the Covid-19 pandemic hit, the local fighting community has been forced to hang up their gloves for the time being.

It’s been almost one, two years since we had a fight, but you have to adapt to whatever the circumstances are. Everyone is anxious for a fight. I’m at a loss too, just like everyone else. The community has been really affected by the pandemic.

Forced to stay at home during the lockdowns, Hares says that he tries to keep up with his training and is looking forward to more matches with the goal of gaining enough skill and experience making up the credentials of his fighting career resume.

As he spends his time off-season and away from the ring, Hares also shares plans of turning his home into a spot where his fellow fighters can come together and train or just chill out whenever they’re in town.

Besides ideas for a future sports gear brand and hosting more of his own promotional matches, Hares says that he will continue to fuel his passion on his personal road to success.

It’s all about intentions. Even if you lose it doesn’t mean that you are a loser. In the end, there’s always something for you to perfect. The path is set, if you wish for it you have to go through it.