Malaysia’s Home Minister was a business man before turning to politics. 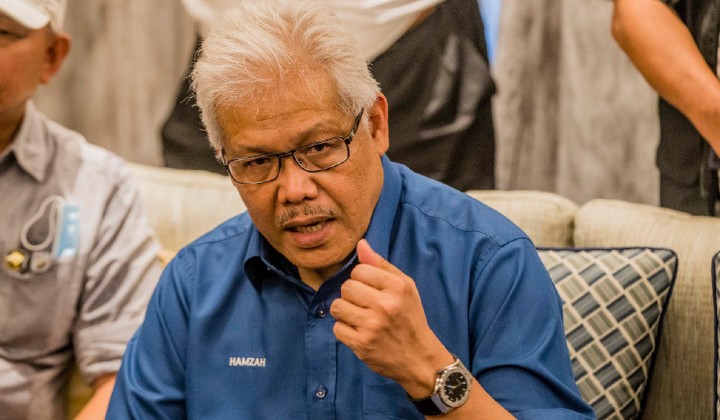 As Home Minister, Hamzah has an extensive list of responsibilities to the Ministry of Home Affairs (Kementerian Dalam Negeri – KDN) as seen in the infographic below.

From property to politics

Hamzah Zainudin holds a Diploma in Quantity Surveying from the Universiti Teknologi Malaysia (UTM) and began his career as a General Manager with Maju Bangun Sdn Bhd, a subsidiary company of the Perak State Development Corporation from 1980 till 1987.

Hamzah has also served as a member of the Board of Ipoh City Council and Stadium Merdeka Corporation from 1987 to 1993 and 1991 to 1997 respectively.

In 1989, Hamzah ventured into private business and sat on several companies listed on Bursa Malaysia Securities Berhad (known then as the Kuala Lumpur Stock Exchange). He held various Chairman and Deputy Chairman duties, including Chairman of FELCRA Berhad, the Federal Land Consolidation and Rehabilitation Authority that oversees land management and development of agro land owned by the State and individuals.

Arguably, Hamzah only gained political prominence in 2008 when he was elected to the House of Representatives (Dewan Rakyat) and became a Member of Parliament (MP) for Larut in Perak. Previously he was a Senator in Parliament (Dewan Negara) from 2000 – 2006.

One of the first times Hamzah was caught in a public hullabaloo was matters of his own personal home affairs.

In 2004, he was asked to pay his first wife Nooraini Rashid RM11.2 million in settlements for allegedly divorcing her to marry a much younger wife. In 2007 however, the Syariah Appeals Court allowed for his appeal to not pay his ex-wife.

In August 2008, former “best friend” and opposition leader Datuk Seri Anwar Ibrahim, filed a defamation suit against him seeking RM10 million in damages over Hamzah’s allegations that Anwar had harassed his wife in 1998. Hamzah allegedly made the remark when campaigning during the Permatang Pauh by-election in August 2008, which subsequently saw Anwar’s return to parliament after a 10-year absence.

Aside from that, Hamzah has remained relatively low-key until 2019 when he accepted Tun Dr Mahathir Mohamad’s invitation to join the Malaysian United Indigenous Party (BERSATU) by quitting United Malays National Organisation (UMNO).

READ MORE: Who Is Bersatu, Where Did They Come From, And How Did They Get Here?

This debatably was the beginning of his involvement in the ongoing political crisis dubbed the Sheraton Move which eventually led to the appointment of Muhyiddin Yassin as the 8th Prime Minister.  Some critics have even labeled Hamzah as “chief plotter” to the coup.

In April 2021, an audio recording was leaked of Hamzah talking about a reshuffle in the police force. The recording went viral and revealed Hamzah discussing with then Inspector-General of Police (IGP) Tan Sri Abdul Hamid Bador, to internally transfer staff and discussing his jurisdiction of Polis Diraja Malaysia (PDRM). Hamzah insisted he had done nothing wrong despite the former IGP’s comment on how a politician’s interference will make operations hard for the PDRM.

READ MORE: 12 Reasons Why Malaysia’s Former IGP Was THE BOSS

Hamzah has also come under fire for targeting migrants, particularly undocumented workers and refugees, although doing so might result in them avoiding the authorities and not getting vaccinated. Australia’s ABC even picked up on the news quoting him saying “We will make sure the prisons are ready” in response to his announcement on Malaysian authorities conducting raids against neighourhoods with undocumented migrants.

Most recently on 15 June, he deemed it was not discriminatory to grant automatic citizenship only for children of Malaysian fathers. His comment was made in response to a legal action filed at the Kuala Lumpur High Court on 18 December after six Malaysian mothers and family rights group Family Frontiers sought a declaration that Malaysian women married to foreign spouses can automatically get citizenship for their children born overseas. This came after the government refused to budge on allowing the children of these mothers to be eligible for citizenship.

By now we know that Covid-19 does not discriminate regardless of race, gender or political standing. In January 2021, Hamzah Zainudin tested positive for Covid-19 and was the third minister in four days to do so in the Muhyiddin Cabinet. Despite recounting it as a painful experience, he has since fully recovered.

More recently, Hamzah has expressed his concern that herd immunity must be achieved in order to make it safe for the public given the Covid-19 pandemic and was mulling the idea of taking legal action against anti-vaxxers.