More and more people are getting into the bird keeping hobby because of the Covid-19 pandemic. 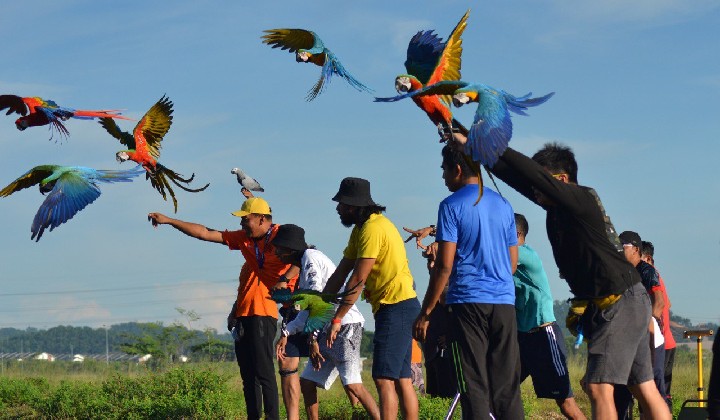 “It’s a feeling that’s hard to describe. Watching them fly happily,” said 30-year-old Syimir Ahmad Safawi when expressing the affection he has for his pet birds and the wondrous world of ‘free-fly’ parrot training.

Sharing his Shah Alam apartment with more than a few feathery friends, Syimir’s interest in bird keeping began during his primary school days, where he would explore his surroundings in search of different creatures and critters.

“I have loved animals, especially birds, since I was a little kid. Every bird that I can catch I will take back home to my parents,” he said, reliving how his childhood curiosity had sparked his future pursuits.

Later as an adult (with a disposable income), Syimir made the leap towards becoming a seasoned bird enthusiast when he impulsively bought his first pet parrot – a teeny-tiny Peached-faced Lovebird he took to calling ‘Picit’.

I found a juvenile parrot on sale and when I came closer to it, I was surprised that the bird was very tame. It immediately got my attention and I decided to buy the bird. In Malay we called it Picit which in English means squeeze. Because it’s very small and cute, it feels like you want to squeeze it.

Like most parrot keepers, Syimir had fallen in love with the bird’s beauty and personality. Being highly intelligent creatures, Syimir went on to explain that parrots can be the most loyal of companions and can express fierce affection during interactions with owners.

Most people know that parrots can talk back to us, you can see it’s like two-way communication, but it’s mostly just mimicking. Parrots have a very intelligent brain, they’re very clever and some people say that they have the mind of a 5-year-old kid. They have their own thinking, their own personality, their own character. Every bird is very different.

Having kept a variety of different parrot species since 2012, Syimir is among the founding members of the Free Fly Parrot Malaysia Community (FFPMC), a community whose passion is to give pet birds a chance to fly freely in the sky – just as nature intended.

The term free-fly, in the bird community, describes the action of training a pet bird to fly freely outdoors. This means that instead of just having birds confined to a cage, free-fly enthusiasts regularly uncage their pets, allowing them to soar high and free in wide-open spaces, before coming home to roost.

“This is like bringing out your dog for a walk, except, parrots fly!” Syimir exclaimed, saying that a bird needs just as much physical and mental reinforcement as us humans do.

The aim is to get the birds healthy both physically and mentally. Just like us, they need their exercise. We need to spend time engaging and interacting with them. They still live in cages, but I let them out to free-fly around the neighbourhood and when the community gets together.

Members of the FFPMC frequently gather in order to let their birds share the skies, and seeing these majestic avian creatures glide effortlessly through the air is truly a magnificent sight to behold.

Each free-fly session can last anywhere from 30 minutes to an hour as owners enthusiastically launch their birds into the air, then call them to return and perch on their arms.

However, Syimir stressed it takes more to free-flying than simply letting birds out of cages as both birds and owners need the appropriate amount of training and experience.

“You try to train them indoors first, see how they respond towards you. Once you are able to do that smoothly without hesitation from the birds, then we can transfer to outdoor training,” he said, explaining the different stages that are required before a bird can be let out to fly.

Syimir also says that it takes the right conditions in order to accomplish a safe and successful free-fly, and owners must be attuned to their birds’ natural instincts.

We usually fly the birds early in the morning because during that time birds are more responsive compared to other times. Noon is usually dangerous because predators start searching for prey. In the evenings, the wind may be too strong and also maybe late evenings. Late evenings are usually roosting time for birds.

As a seasoned free-fly trainer himself, Syimir continued by explaining that it is also much safer to free-fly in large groups – to avoid birds being disoriented, injured or getting lost.

They have their own common sense, or nature to guide them to flock together. Some birds become followers, some birds become leaders. So the lead (bird) will lead the birds to come back to us.

Having lost a few birds over the years while free flying, Syimir says that the lifestyle might not be suited for everyone.

We as parrot owner want to give the best life for them, they are born to fly hence we cannot take that ability and freedom away. But to have this opportunity and this kind of lifestyle we need to have the knowledge on how to handle and train them. Free fly is for all birds but not for all parrot owners.

However, the bird lover still encouraged anyone who would like to pick up on the hobby to do so with the right amount of knowledge.

For beginners, we have experienced people who can guide and train them to free-fly safely.

As the Covid-19 pandemic brought movement restrictions across the country, Symir reveals how difficult it has been for him and other free-fly bird keepers to continue with their aerial lifestyle.

There’s good and bad. Most parrot owners are happy because they can work from home and spend time with their bids, but the cons are that it’s difficult for us (as a community) to gather. We love to see birds flock together.

He added that for some bird keepers, the movement control order (MCO) has made it difficult to find a safe open space to let their birds out.

Next to my house is an open space, so I don’t have a problem. But some of my friends and clients (who live in the city) don’t have the opportunity.

Syimir however remains hopeful that the community would persist and grow, despite the challenges they faced during this trying time.

Actually, a lot of people have gained an interest in bird keeping since the pandemic. Not that many children but women, yes.”

Feel free to check out the Parrot Recall Project on Facebook for more details on the free-flying lifestyle, or connect with Syimir on social media for tips and tricks to get yourself started in bird keeping.