Malaysia will have our own One Million Trees project as well. 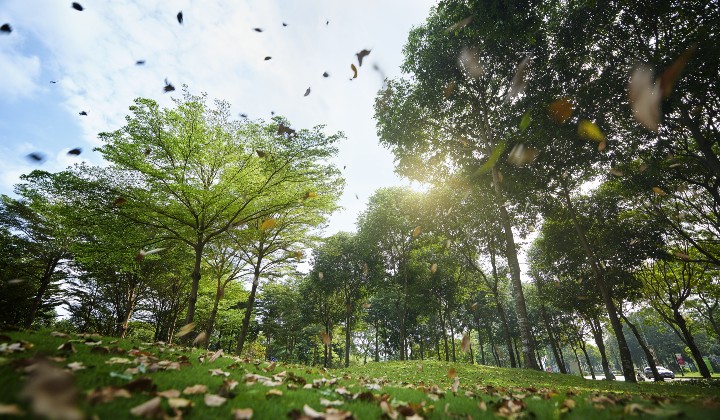 The climate crisis is forever a looming worry. Although in recent months it has taken a backseat to the more pressing concern of Covid-19, the threat is still there. That doesn’t mean that concerned groups have been inactive this whole time.

In short, more carbon dioxide in the air equals hotter air, raising the temperature everywhere you are.

The best way to combat climate change is carbon sinks, because the very main goal is to lock up carbon in the soil instead of having carbon dioxide float about in the air trapping in heat.

Nature’s largest carbon sinks are plants, the ocean, and soil. Of the three, the only ones that humans can harness are plants and soil. That’s why there has been such a strong push to grow plants at every opportunity.

Trees are proven to cool you down

Even in urban centers, trees are crucial to turn down the heat. It’s been proven that vegetation in urban areas can cool down temperatures in heat islands significantly! It’s especially important with how unbearably hot Malaysia is getting– a direct consequence of the climate crisis.

In fact, residential developments that have a lot of trees actively absorbing carbon dioxide are proven to be up to 1°C to 2°C cooler than surrounding urban road systems. That’s probably more efficient than those “cooling fans” that have become so popular recently!

This was proven in Vietnam, where the Celadon City residential development included a large amount of native trees with various local species to further boost biodiversity conservation efforts.

Worldwide, multiple cities have pledged to keep planting trees. The Million Tree Initiative has been adopted by urban cities such as Los Angeles, New York City, Shanghai, London, and more.

Naturally, the aim of the Million Tree Initiative is to increase urban forests, especially with the rising concerns surrounding climate change.

Even our neighbour Singapore has kickstarted an ambitious revival plan in August 2020 for their mangrove forests– after they lost over 90% of it to urban development.

They have began conservation works in the Sungei Buloh Park Network (no relation to our bandar Sungai Buloh in Selangor), which aims to be a safe haven for crucial Southeast Asian flora and fauna such as hornbills, otters, saltwater crocodiles, and over 35 different species of mangrove trees. The program aims to have one million trees planted in the 990-acre park over the next 10 years.

What About One Million Trees In Urban Malaysia?

Malaysia also faces heavy deforestation to make way for development, but there has been a huge surge of demand to keep and promote our lovely greenery even as we chase after urban development.

Knowing how important trees are for peaceful, healthy living, many property developers have taken the initiative to preserve and promote biodiversity in their developments.

One such example is Gamuda Land, which aims to plant one million trees across their townships by 2023. To date, they have planted over 334,000 trees– so they are looking to triple their current amount. In fact, Gamuda Land was the developer behind Vietnam’s Celadon City, which enjoys much cooler and clear air!

Naturally, trees are living, growing beings, and must be suited for the climate they’re in. Which is why Gamuda Land focuses on native species and local plants to maintain a healthy ecosystem, with up to 70% of all trees planted to be native by the end of 2021.

All the trees are specially cared for for up to two years in holding nurseries until they can be properly transplanted to Gamuda Land properties. This two-year period will ensure that the trees grow healthily and provide cool, clean air for decades.

Wetlands, the artery of Malaysia

One of Malaysia’s distinctive geography is wetlands. This includes damp, wet land such as mangroves and peats, which is home to special types of plants evolved to thrive in such conditions. Wetlands are the life and blood of Malaysia– even Kuala Lumpur itself literally means muddy estuary in Malay because it used to be wet marsh before it was developed!

In a nod to this fascinating and important ecology in Malaysia, the Wetlands Arboretum is a large botanical library of unique local flora and fauna that is contiguous with the 1,111-acre Paya Indah Discovery Wetlands in the Southern Kland Valley.

The Wetlands Arboretum will be housed within a spacious 90-acre forest park in Gamuda Cove, aimed to fight climate change while being a natural sanctuary for wildlife conservation, nature research and forest fitness.

This unique “living plant library” will exhibit more than 300 protected wetlands species, aquatic plants and marshes. It will fulfil multifunctional objectives for Gamuda Parks, such as forest restoration, floodwater drainage reserve, research lab and seed bank facility, and will be open to public in 2021.

It’s Still Possible To “Spread the Smile” For Christmas With Loved Ones, This Is How