Volunteers in Papan are piecing together old files and documents to restore forgotten memories. 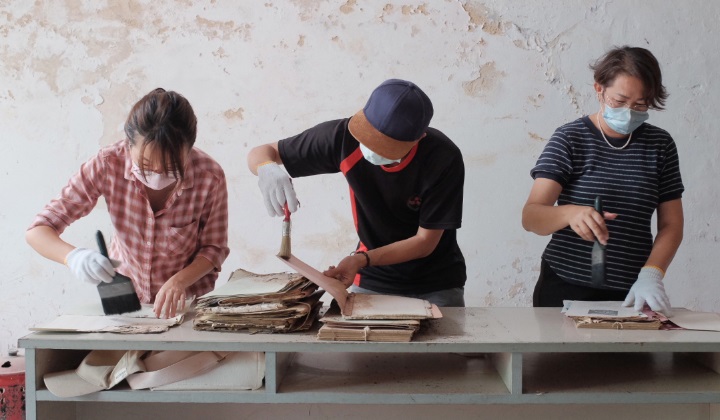 Sometimes, we will never know the value of a moment until it becomes a memory.

But, in the abandoned mining town of Papan in Perak, a group of volunteers are working to save the past from the ashes of time by restoring and preserving old files and documents.

In its heyday, Papan was at the frontier Perak’s tin mining industry, back when that was still lucrative.

A surprise discovery of historic treasure

Then last year, just before the Covid-19 pandemic broke out, a museum curator named Jacky Chew who works at the Kinta Tin Mining Museum in neighbouring Kampar made a discovery.

Around 300 old files and documents had been stashed away in the old abandoned premise of SJKC Papan, which had been relocated to the main street of Papan.

They date back to as early as 1929, the year that ushered in the worldwide Great Depression, the worst economic downturn in the industrialised world’s history.

Also found were old textbooks dating back to the 1930’s and children’s reading materials from the same premise’s library.

Chew says the files and documents could be the oldest discovered in a school anywhere in Malaysia.

“Papan boasts a rich history, but there is little support for preserving what remains of its heritage.

“These are materials relating to the British era, the Second World War, the Emergency and traces our nation’s journey from independence to nationhood.

“There are also hand-written documents. It’s heart-warming that one of our volunteers, who studied at the school, found a record of her graduation,” he told TRP in an interview.

Chew and his fellow volunteers are devoting their Sundays to restore and preserve the material – some of which have been eaten up by termites.

He says it is a matter of more than just local concern, given the importance of Papan and its neighbouring towns before and after Merdeka.

This is because until the late 1970’s, Malaysia was the world’s premier producer of tin, supplying some 40% of the world’s tin.

Chew and his volunteers are keen to mention that they could do with some extra pair of helping hands to increase their preservation efforts.

It may be a long wait for the material to be fully restored – but perhaps it means there could still be a future for Papan’s unique reminders of the past?

Kazim Elias Pulls Out Of GE15